This banana zucchini oat bread, made with whole grain rolled oats and oat flour, is vegan, gluten-free, and unbelievably moist and delicious. 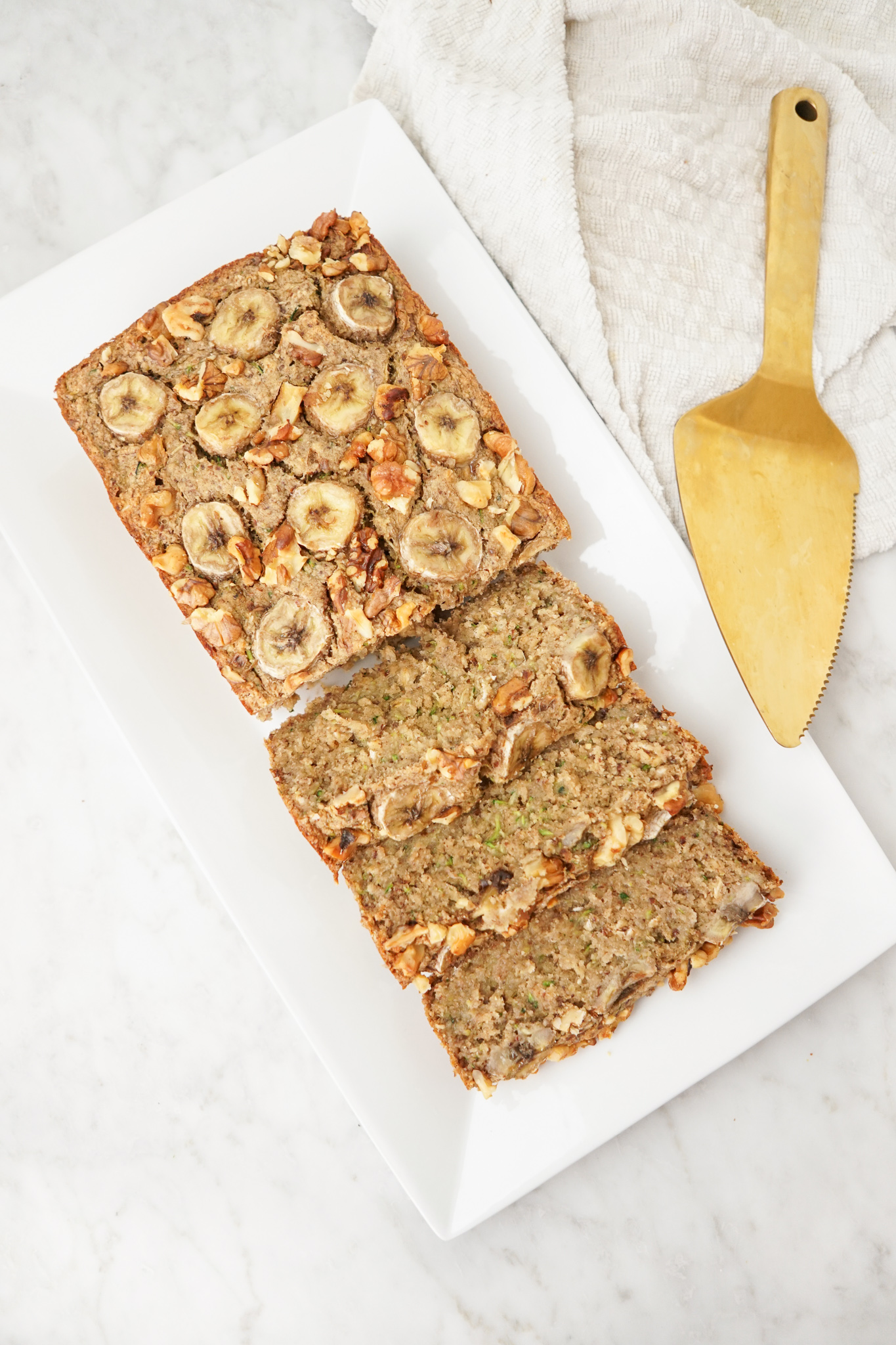 I have made many banana breads in my time with varying levels of success, but none have come close to the deliciousness and nutritious-ness of this one. 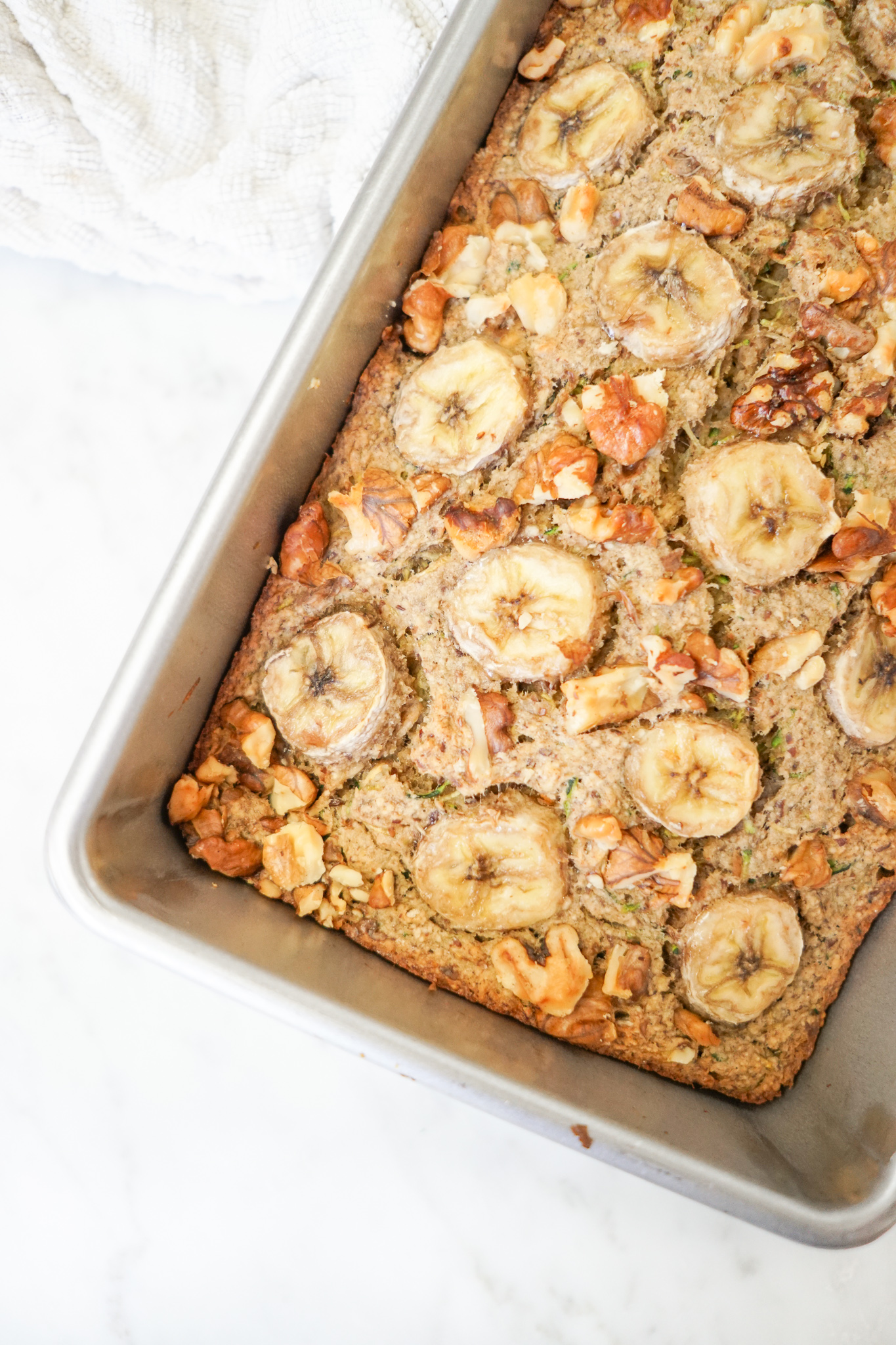 But the star ingredient in this recipe is really the oats. You probably already know that I’m a little OAT-sessed with this rock star of a whole grain. I eat oats daily – for breakfast in my Super Seed Oatmeal, Vegan Banana Belgian Waffles, and Raspberry Oat Bake, as a snack in my Raspberry Peanut Butter Power Balls, Tahini Date Shake, or Vegan Apple Crisp, and in more savory dishes like my Pizza Oat Bake or Vegan Meatballs. Oats are my lifeblood. 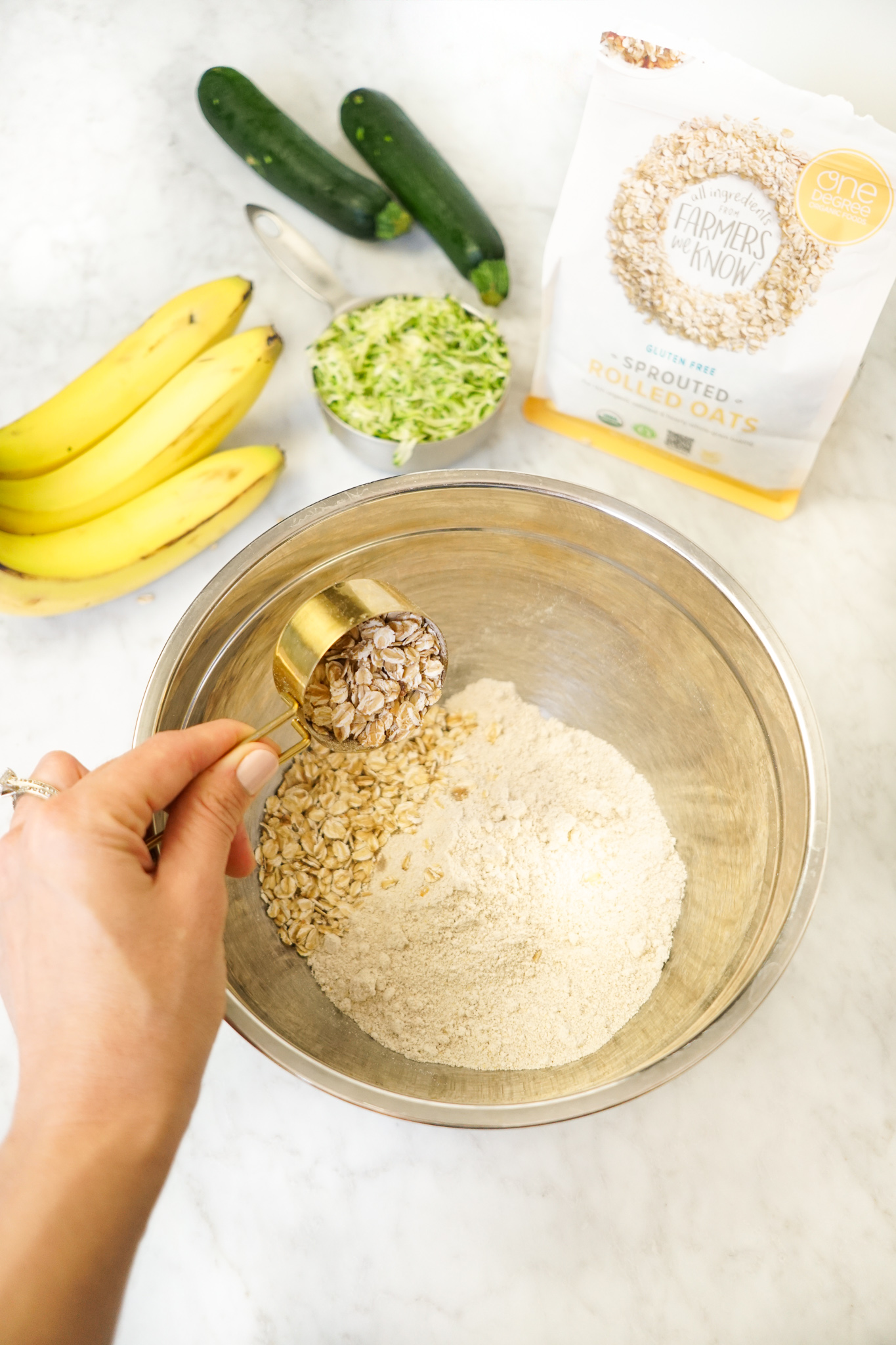 But I’m picky when it comes to oats. I opt for One Degree Organics Sprouted Oats for a couple of reasons. One – they’re sprouted. Sprouting liberates minerals in grains like iron, making them more bioavailable. This is super important on a plant-based diet, as iron found in plants is harder to absorb. Sprouting helps to get around this.

Two – they’re glyphosate-free. Glyphosate is the most widely used herbicide in the world and has been deemed a “probable human carcinogen” by the World Health Organization and is listed by the California Office of Environmental Health Hazard Assessment as “known to cause cancer.”

In 2018, the Environmental Working Group conducted a study of conventional oat products, many of which are marketed to children, and found that every single one of them had detectable levels of glyphosate and 26 exceeded the acceptable upper level set by the agency.

Buying organic is one way to avoid glyphosate, as organic farming prohibits the use of the herbicide, but unfortunately, this isn’t a guarantee. Herbicide drift from neighboring conventional farms may cause glyphosate to end up in organic foods. This is why some companies like One Degree Organics are now opting to go a step further for their customers and have their products third-party tested. 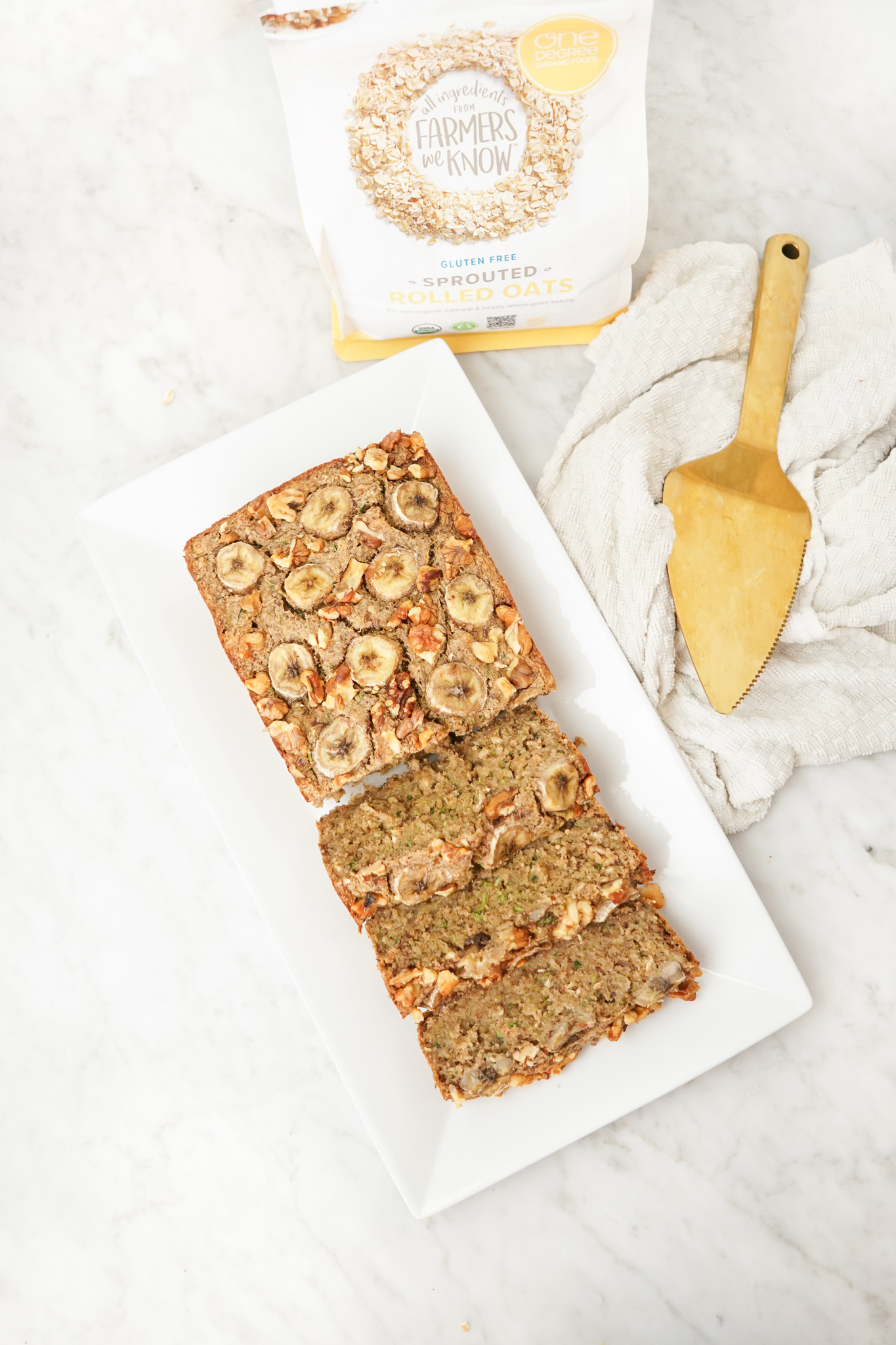 To tell if a product has been tested, look for a glyphosate-free certification on packages from companies like BioChecked.

But enough about nasty chemicals, this banana zucchini oat bread is only full of the good stuff. In addition to the hearty oats, sweet naners, and zucchini, this bread uses ground flaxseed in place of eggs and a minimal amount of maple syrup for extra sweetness. We’ve also got some coconut oil in there for moisture and a hint of cinnamon for that extra something, something. 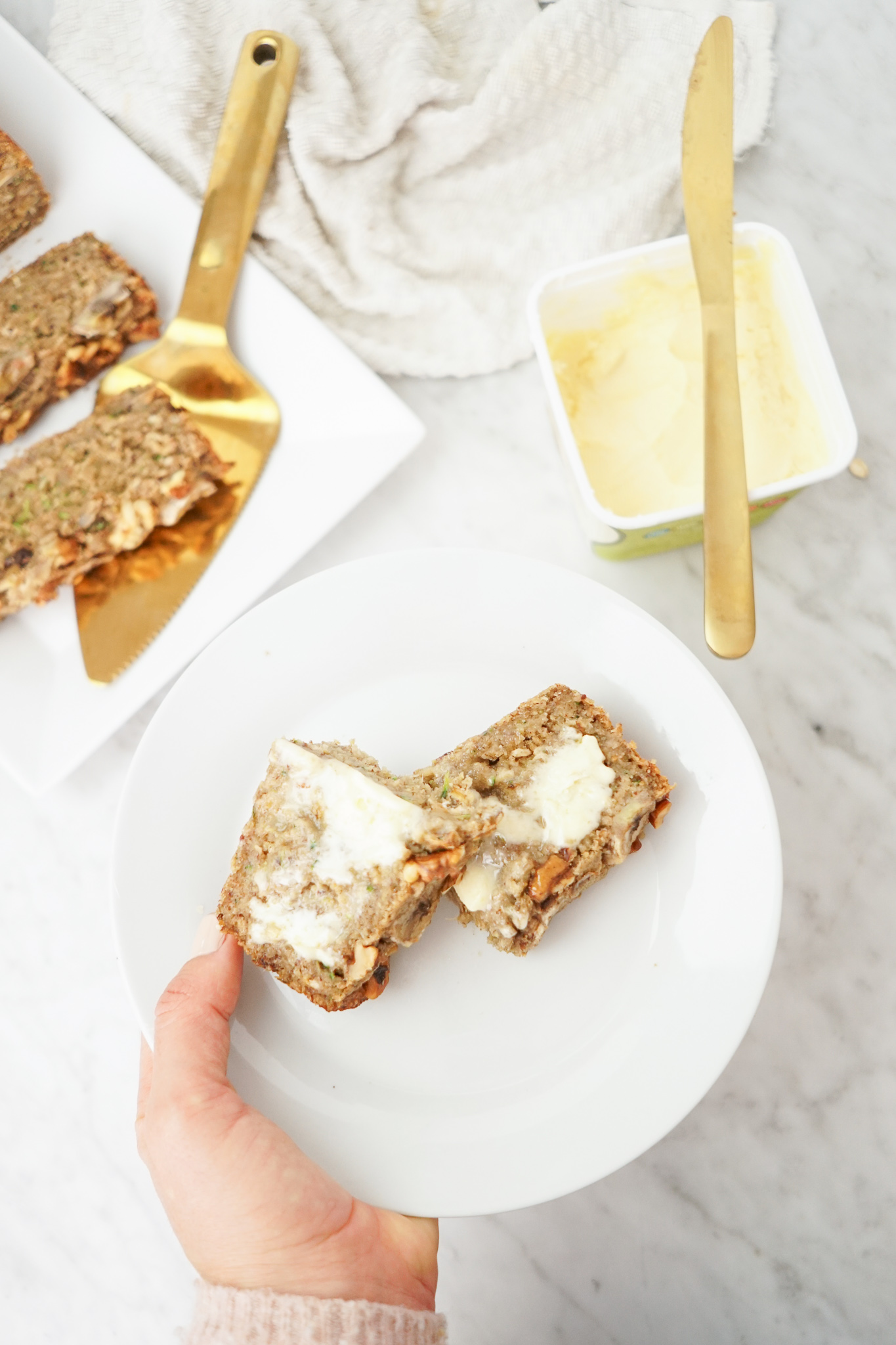 These things are so moist, gooey, and perfectly sweet that you won’t believe they’re packed with nutrition. 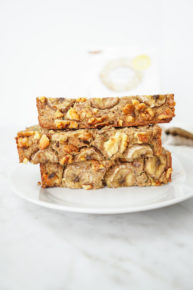 Print
Prep time
10 mins
Cook time
50 mins
Total time
1 hour
This banana zucchini oat bread, made with whole grain rolled oats and oat flour, is vegan, gluten-free, and unbelievably moist and delicious.
Author: Whitney English
Recipe type: Dessert, Snack
Serves: 1 loaf
Ingredients
Optional Toppings
Instructions
3.5.3226
This banana zucchini bread will last for about a week in the fridge (although there’s no way you won’t demolish it quicker) and can be frozen for a few months. Simply tightly wrap the loaf in plastic wrap or beeswax. 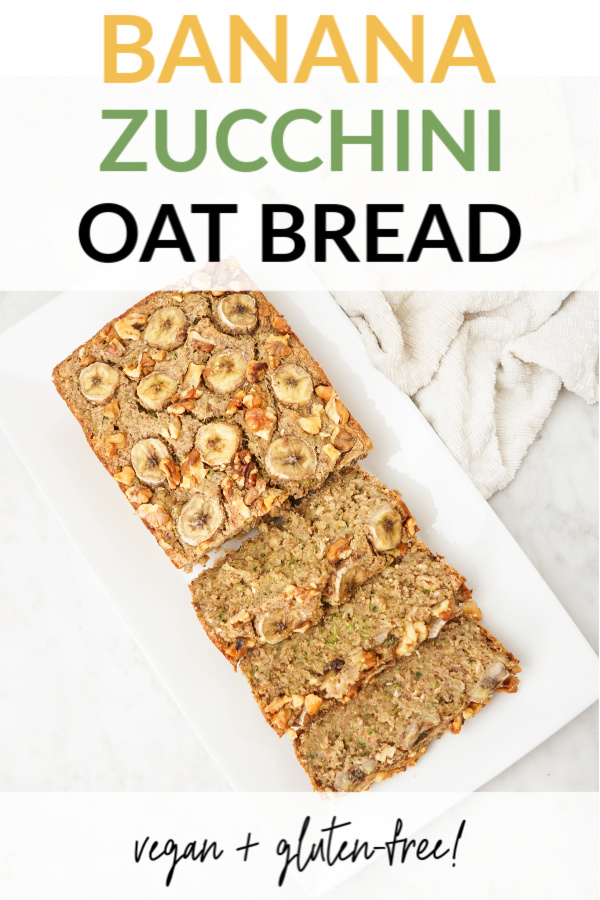 Weigh-in: Do you opt for glyphosate-free or organic oats? Will you try this banana zucchini oat bread?

*This post is sponsored by One Degree Organics but all opinions are my own. I thank you for your support of Whitney E. RD-approved partnerships that make this website possible.