The war on gluten seems to be never-ending, and low-carb proponents claim we should avoid all grains – gluten-free or not. However, gluten is misunderstood, and not all grains are created equal. Today, I’m sharing everything you need to know about wheat, gluten, and grains!

Today we’re addressing an issue that I’ve been meaning to talk about for a long, long time: the truth about wheat, gluten, and grains. The war on wheat continues to wage on as advocates of paleo, keto, low-carb, and carnivore diets cry out about the harms of gluten and grains.

On the other side of the battlefield, nutrition professionals and plant-based dieters alike point to the decades of research showing that diets rich in whole grains are associated with lower rates of obesity and chronic disease.

So if the evidence is so clear cut – why are so many people continuing to alienate the friendly wheat plant? Let’s explore. First up, we’re going to define some related but discrete terms. 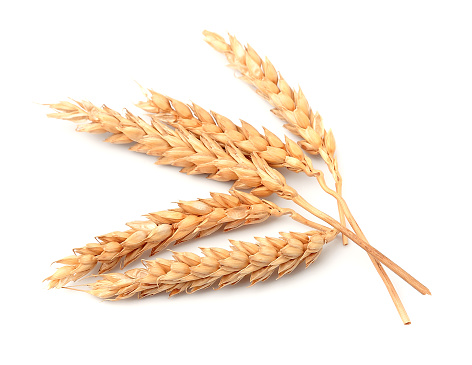 Wheat refers to a type of grain that contains gluten. Wheat products come in two forms – refined and unrefined.

Refined wheat products, also described as “refined grains” or “simple carbohydrates,” are those that have been stripped of beneficial nutrients like fiber, vitamins, and minerals. Some products have some of these nutrients added back in, but generally, they are nutritionally inferior to unrefined wheat products. Refined grains include products like white bread, white flour, pearled barley and gluten-free products like white rice.

Unrefined wheat products, also described as whole grains or complex carbohydrates, retain all of the beneficial components of the wheat plant – the belly-filling, disease-fighting fiber and the essential vitamins, minerals, and phytochemicals such as phenolic acids. Unrefined grains include products like whole-wheat bread, whole-wheat pasta, wheat berries and wheat-free grains like oats, corn, and brown rice. 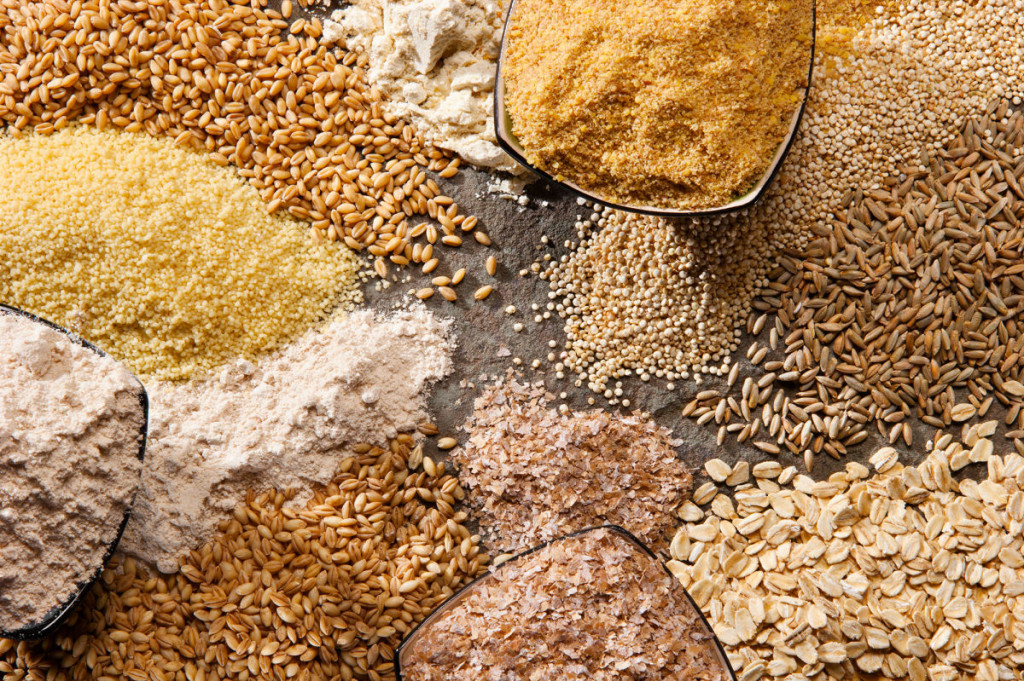 Research shows that consuming whole, unrefined grains is associated with reduced rates of cardiovascular disease, cancer, and mortality from all causes including respiratory diseases, infectious diseases, and diabetes.

Finally, contrary to claims that grains are “inflammatory” another large study found that a high intake of whole grains was associated with a 34% reduction in mortality from inflammatory diseases compared to people with a low intake. 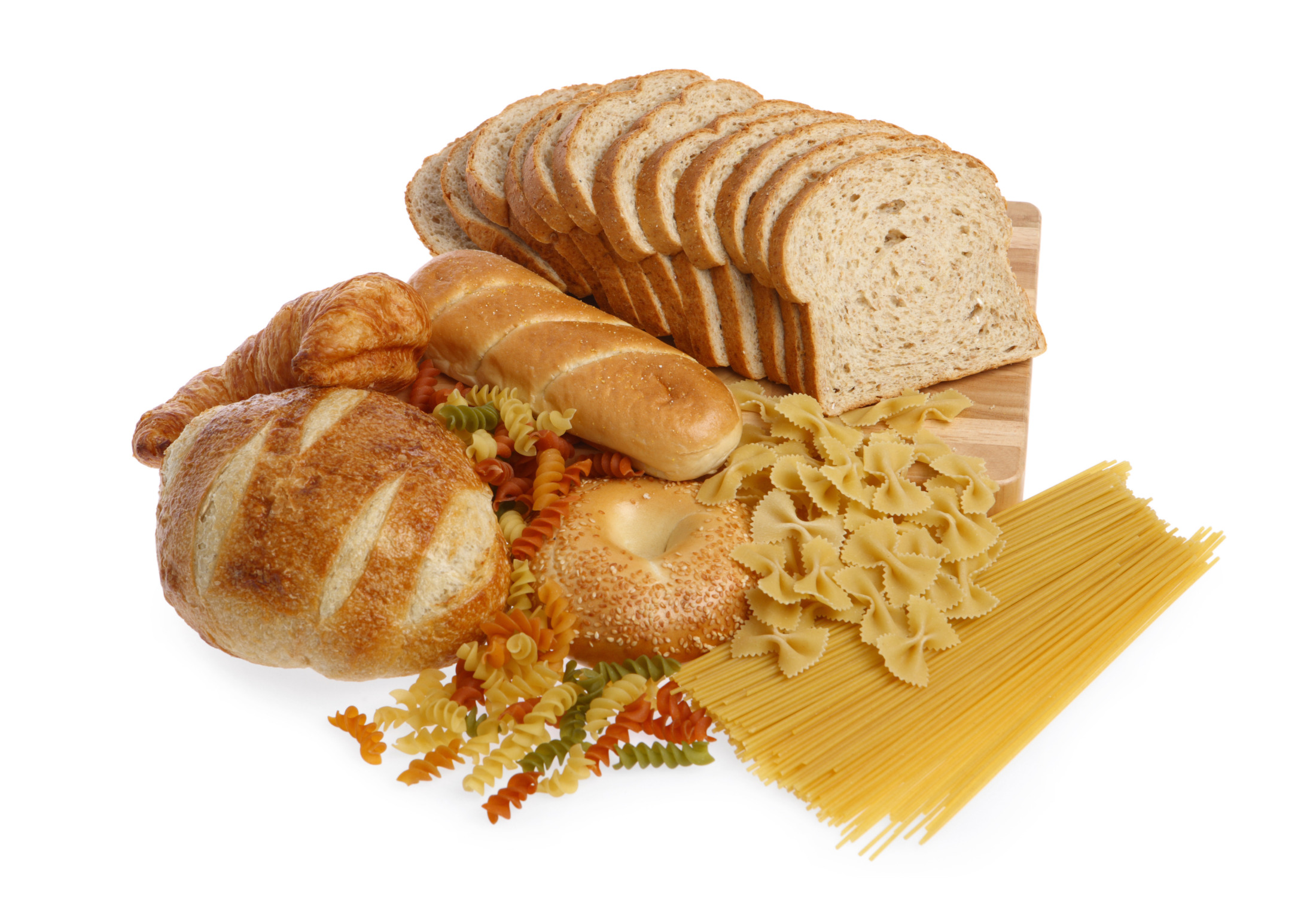 Refined grains, however, are what give the grains category, in general, a bad rap.

Consuming refined grains is associated with either no benefits to health or an increased risk of poor health outcomes. Aside from lacking many micronutrients and phytochemicals, the biggest problem with refined grains is their lack of fiber.

Fiber intake may just be one of the most important determinants of health.

Fiber has widespread benefits: It provides energy to our colonic cells and fuel for a diverse, healthy microbiome; its breakdown results in the production of bioactive molecules that regulate metabolism and food intake; fiber helps manage blood sugar and reduces cholesterol; and it ensures the proper functioning of our digestive system, which is essential to treat and prevent diseases like diverticulitis, inflammatory bowel disease, and colon cancer.

Despite what you may hear from the paleo crowd, people who cut out grains are hard-pressed to meet daily fiber needs. One study found that half of the daily menus on a model paleo diet plan which required the consumption of 9 servings of fruits and vegetables per day – but no grains – fell below the recommended daily amount of fiber, which is 38 grams for men and 25 grams for women.

That was with 9 servings of fruits and veggies per day!!! The average American doesn’t even manage to hit 5 servings a day – how many caveman wannabes do you know taking in 9 servings of produce? Meanwhile, studies estimate that the actual paleolithic diet contained more than 100 grams of fiber per day, and modern hunter-gatherers consume between 80-150 grams of fiber a day.

Diets high in animal protein and low in fibrous plants have been shown to deplete bacterial communities that are responsible for producing beneficial short-chain fatty acids and increase populations of inflammation‐associated proteobacteria. Experts believe this may lead to an increased risk of colonic disease. 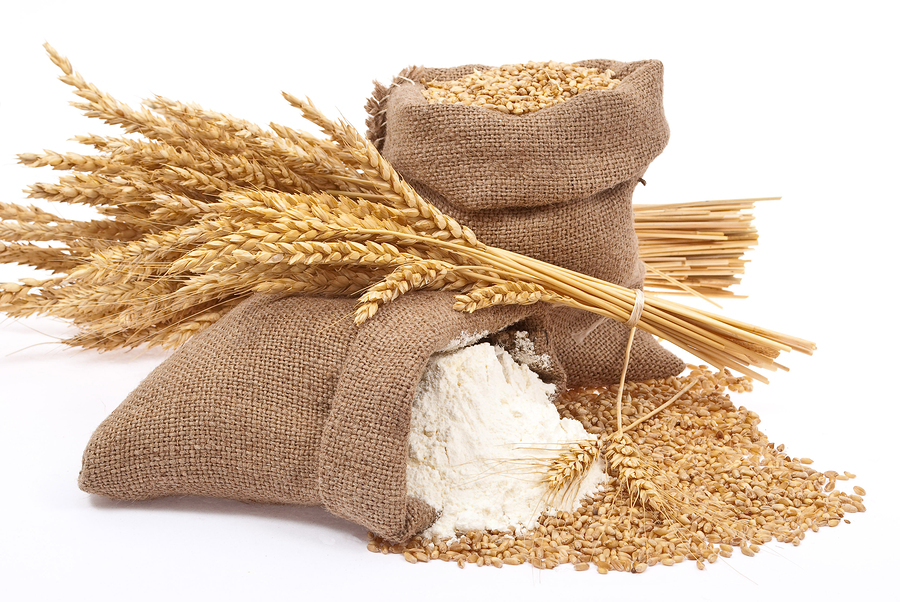 So now that we understand why grains are important for fiber intake, let’s talk about a more controversial component of grains – gluten. For those without a food science background, I’ll give a brief overview of this fear-inducing substance.

Gluten is the main protein found in some grains including wheat, barley, rye, spelt, kamut, and semolina. Gluten is also used as a food additive in many products to improve texture or moisture retention.

Despite the popularity of gluten-free diets, the incidence of true gluten allergy or intolerance is quite low. Only about 1% of the population suffers from a gluten allergy, known as celiac disease. These people have an immune response to gluten that results in damage to their small bowel. Individuals with celiac disease must completely avoid gluten – they can’t even use a toaster that has been used with wheat.

Non-celiac gluten sensitivity, on the other hand (aka gluten intolerance) is not as well defined. Studies estimate that between 0.6% and 13% of individuals may have the condition, which is characterized by gastrointestinal issues and extra-digestive symptoms like fatigue and dermatitis.

But studies on it are highly conflicting and reveal that patients are often misdiagnosed with the condition. For example, one study found that out of 35 patients who were diagnosed with non-celiac gluten sensitivity, only a third experienced symptom recurrence after a double-blind gluten challenge.

This means they gave people who were previously on a gluten-free diet flour with gluten or without gluten and watched what happened. Most of these individuals couldn’t identify the gluten-containing grains, revealing that their symptoms were not actually caused by gluten.

DOES GLUTEN CAUSE LEAKY GUT SYNDROME?

Another thing I want to address is the claim that gluten causes “leaky gut syndrome.” First of all – this term is only used by pseudoscientists. The actual medical terms are “increased intestinal permeability” or “impaired barrier function” and research does not support the idea that gluten damages the gut in individuals who do not have celiac disease or gluten intolerance.

One study comparing the intestinal cells of celiac patients to non-celiac patients found that while gluten did increase intestinal permeability in both cell populations, the increase was reduced and transient in the non-celiac cells. Meaning, it only lasted a short period of time. In fact, a small degree of permeability is actually beneficial in the gut for promoting nutrient and water absorption.

So if it’s not the gluten? Why do some people say they feel better on a gluten-free diet? Well, the first thing we have to address is the placebo effect. When people think they’re actively doing something to benefit their health, they actually start to feel better. The mind is a powerful thing.

More likely though, cutting out gluten results in cutting out other potentially triggering dietary components. For example, some people diagnosed with gluten sensitivity may actually have irritable bowel syndrome, and symptom improvement on a gluten-free diet is actually the result of removing poorly digested carbohydrates from the diet.

These starches, known as “fructans”, are fermented by the gut bacteria, and in some sensitive individuals, they cause digestive distress. A low FODMAP diet, which excludes fructans found in most wheat products and thereby also excludes gluten, has been shown to help reduce symptoms of digestive distress in both adults with supposed non-celiac gluten sensitivity and IBS. 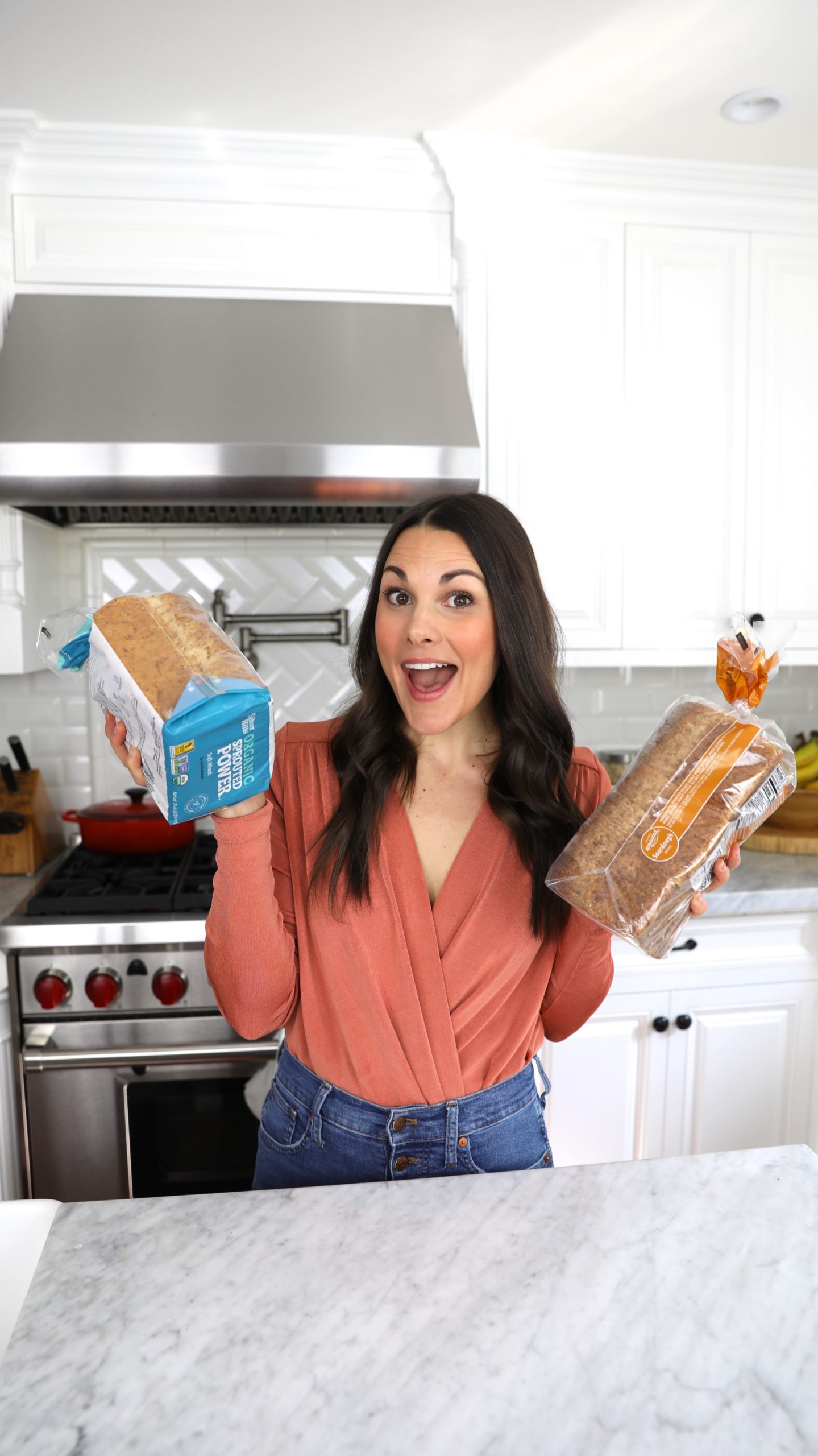 However, not all wheat products are created equally. Wheat products that have been sprouted or produced using a process known as “slow fermentation” have low amounts of fructans and are better tolerated by people with IBS.

Slow fermentation refers to the natural process of making sourdough bread, whereby bakers use a mixture of wild yeast and lactic-acid producing bacteria to ferment dough, as opposed to using fast-acting baker’s yeast. This process results in the degradation of these fructans. Similarly, sprouting grains has shown to significantly reduce the amount of fructans in wheat.

Anecdotally, I can say that I feel better when I eat sprouted grains. I suffered from IBS for most of my life until, ironically, I began to eat a more plant-based diet. For one, I was taking in more plants and fiber, which research shows helps to fuel the types of beneficial bacteria that are equipped to handle plant fibers. Basically, your body adapts to what you feed it. But secondly, I began consuming sprouted grains. I haven’t had digestive issues since – knock on…marble.

The last potential reason that people think they experience benefits from a gluten-free diet is that they probably do start eating healthier. Anytime we make a dietary change, whatever it is, we start to focus more closely on our nutrition across the board, which often results in health benefits. Cutting out gluten means that people also cut out refined grains, which, as we learned earlier, are not good for our health.

THE BOTTOM LINE ON WHEAT, GLUTEN, AND GRAINS

To sum up the research on gluten – currently, a gluten-free diet is only clinically indicated for those with celiac disease or true non-celiac gluten sensitivity. Evidence does not support gluten-free diets for any other condition – including hypothyroidism, PCOS, IBD, arthritis, autism, ADHD, or anything else – despite what you may have heard.

And it’s definitely a bad idea for healthy adults, given what we’ve learned about the detrimental effects of a low-fiber diet. 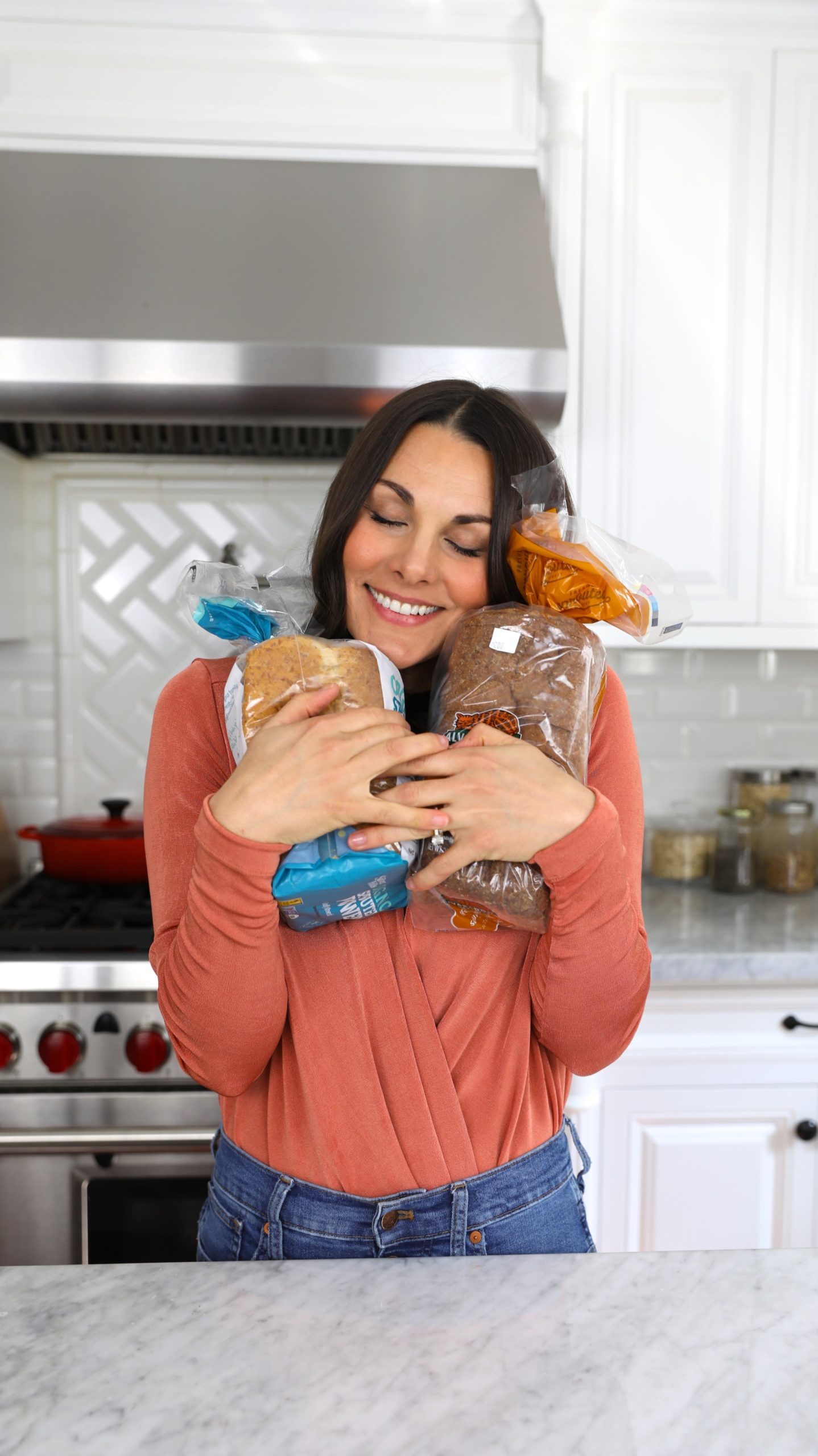 I hope this info allows you to enjoy your sprouted grain tempeh lettuce and tomato sandwich in peace.

Weigh-in: Have you ever avoided wheat, gluten, or grains because you heard they were bad for health?