This vegan Hawaiian pizza has all the flavor of a standard meat-heavy pie, made with simple nourishing ingredients. Inspired by Blaze Pizza’s classic Hawaiian, these tasty single-serving pita pizzas are made with tempeh bacon, Daiya shredded mozzarella, pineapple, green and red bell peppers, onions, and tangy BBQ sauce. 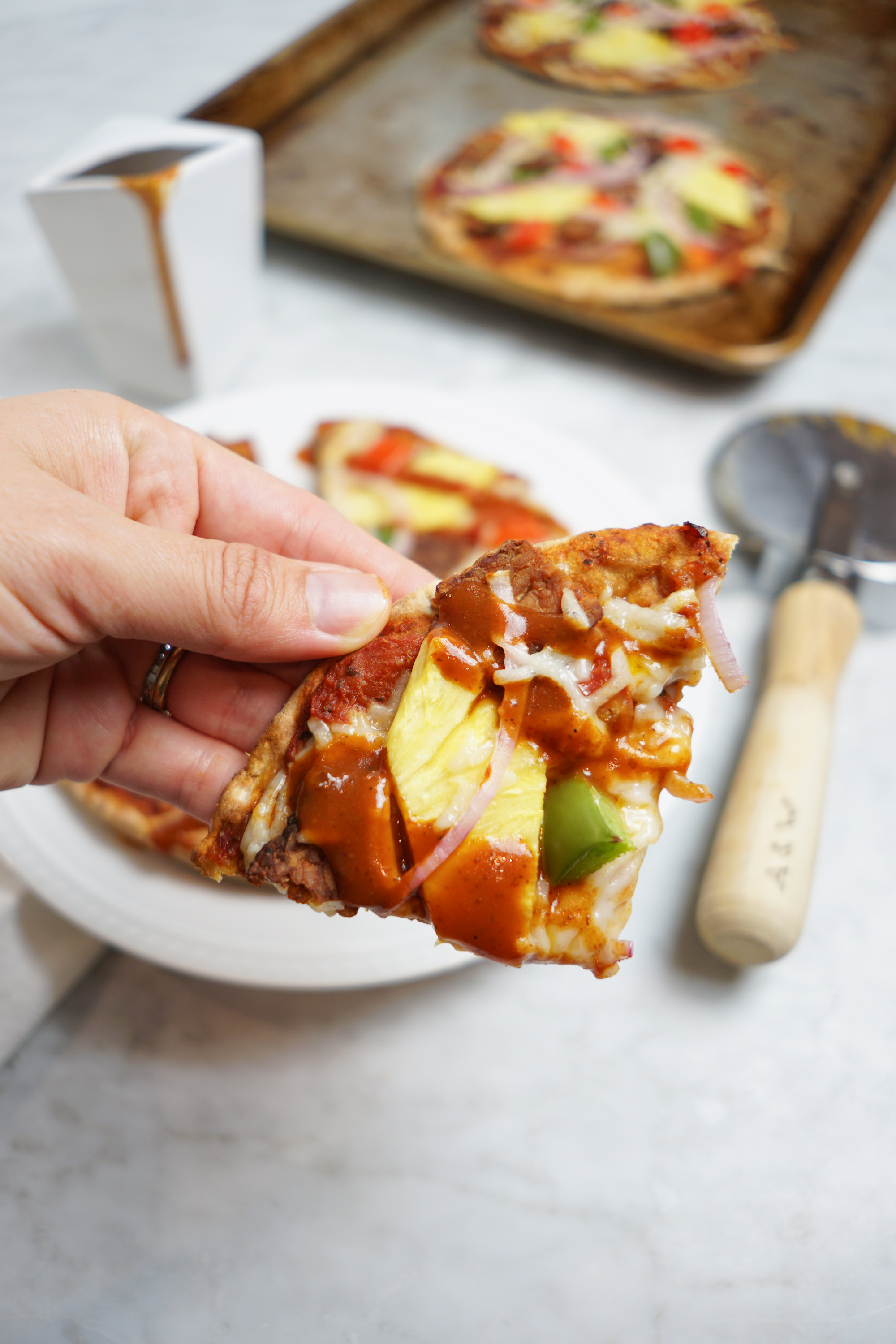 I asked you guys on Instagram recently if you are pro or anti pineapple pizza and, as expected, the group was divided right down the middle. Apparently, pineapple is a very polarizing pizza topping!

I’m pro-pineapple all the way. I love the sweet and savory combo of fresh fruit with Italian spices and tangy tomato sauce.

These Vegan Hawaiian Pizzas are so good that I think they could convert even the most fervent pineapple critic. 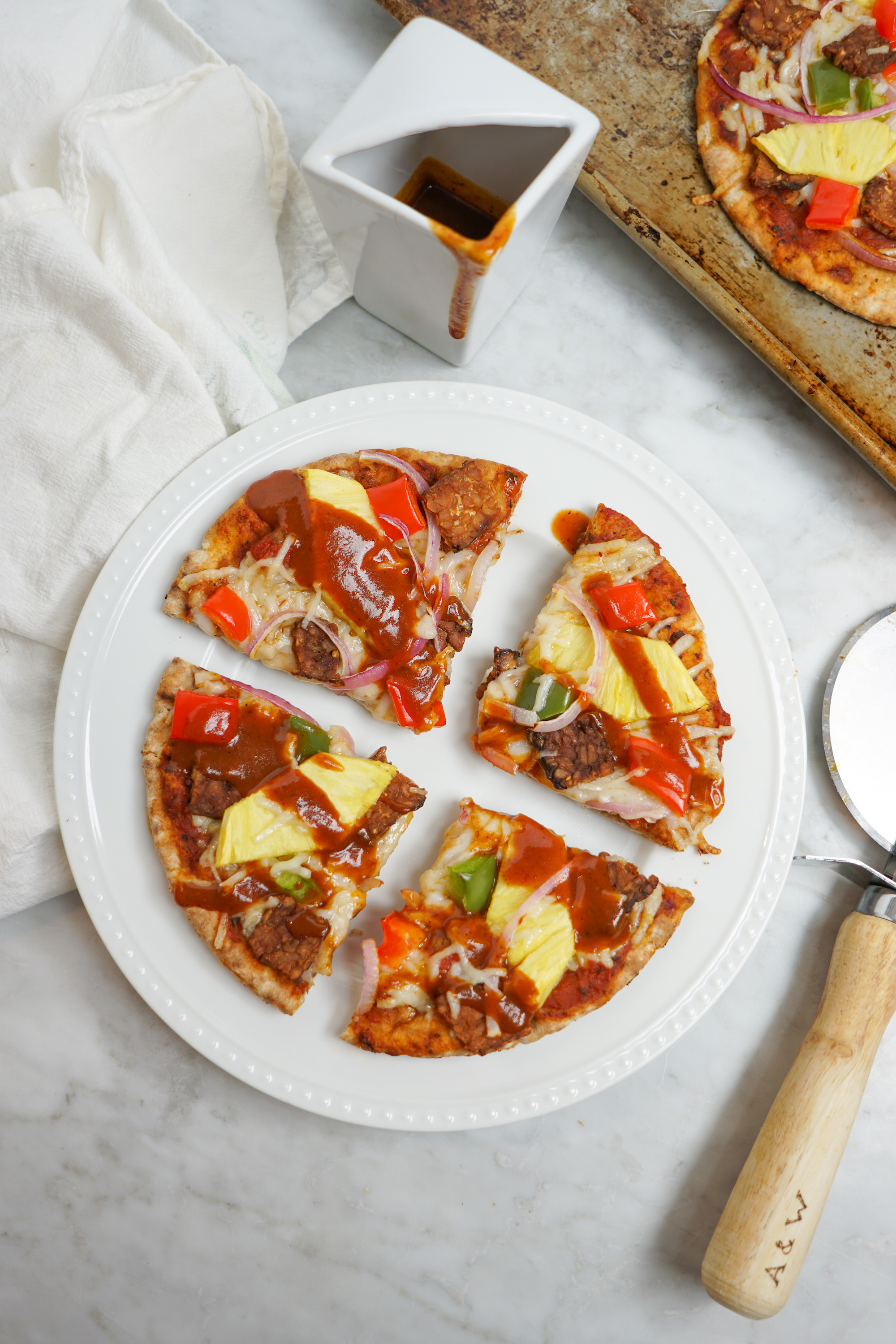 With a smokey, savory aroma from the tempeh bacon and the crisp crunch of red onion and green and red bell pepper, the pineapple and BBQ sauce add a burst of welcomed sweetness to the mix.

These pita pizzas are topped with ooey gooey vegan mozzarella cheese from Daiya’s new Cutting Board Collection, which melts so perfectly, you’ll have a hard time detecting that it’s dairy-free.

The inspiration for this recipe came from a delicious pie I had at Blaze Pizza in Pasadena recently. 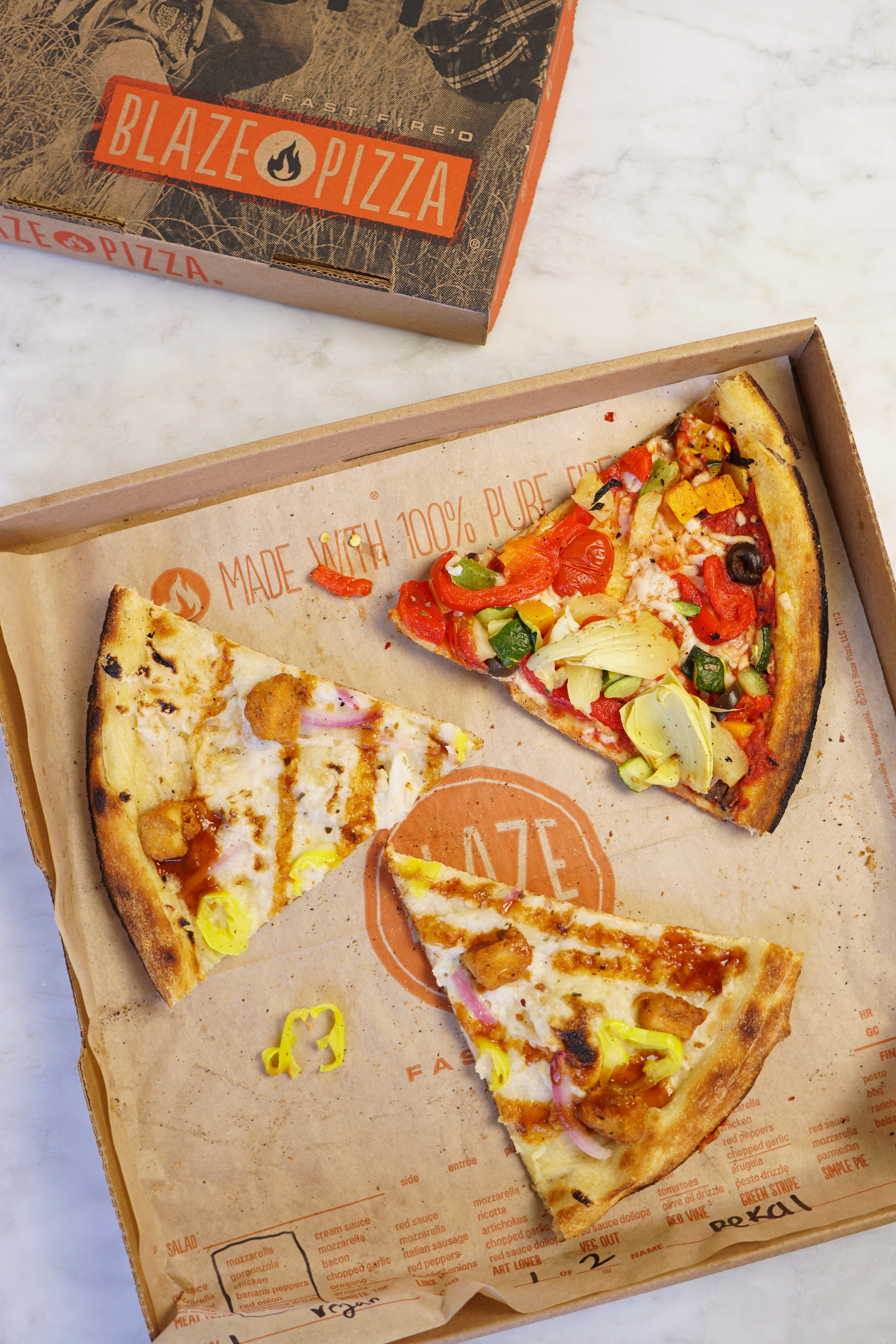 If you’re not familiar with Blaze, they make incredibly tasty pizza, from-scratch, in about five minutes flat in their blazing hot brick oven. They use super simple ingredients like wheat flour and extra virgin olive oil, and all of their products are free of artificial colors, dyes, and preservatives.

They recently started carrying Daiya Cutting Board Collection Shreds in 237 locations nationwide — at no additional charge for the premium plant-based topping. We have a location nearby which we’ll be frequently more often now that I know about this option.

When we don’t go out though, these homemade Hawaiian pita pizzas are a great quick and easy night-in meal. 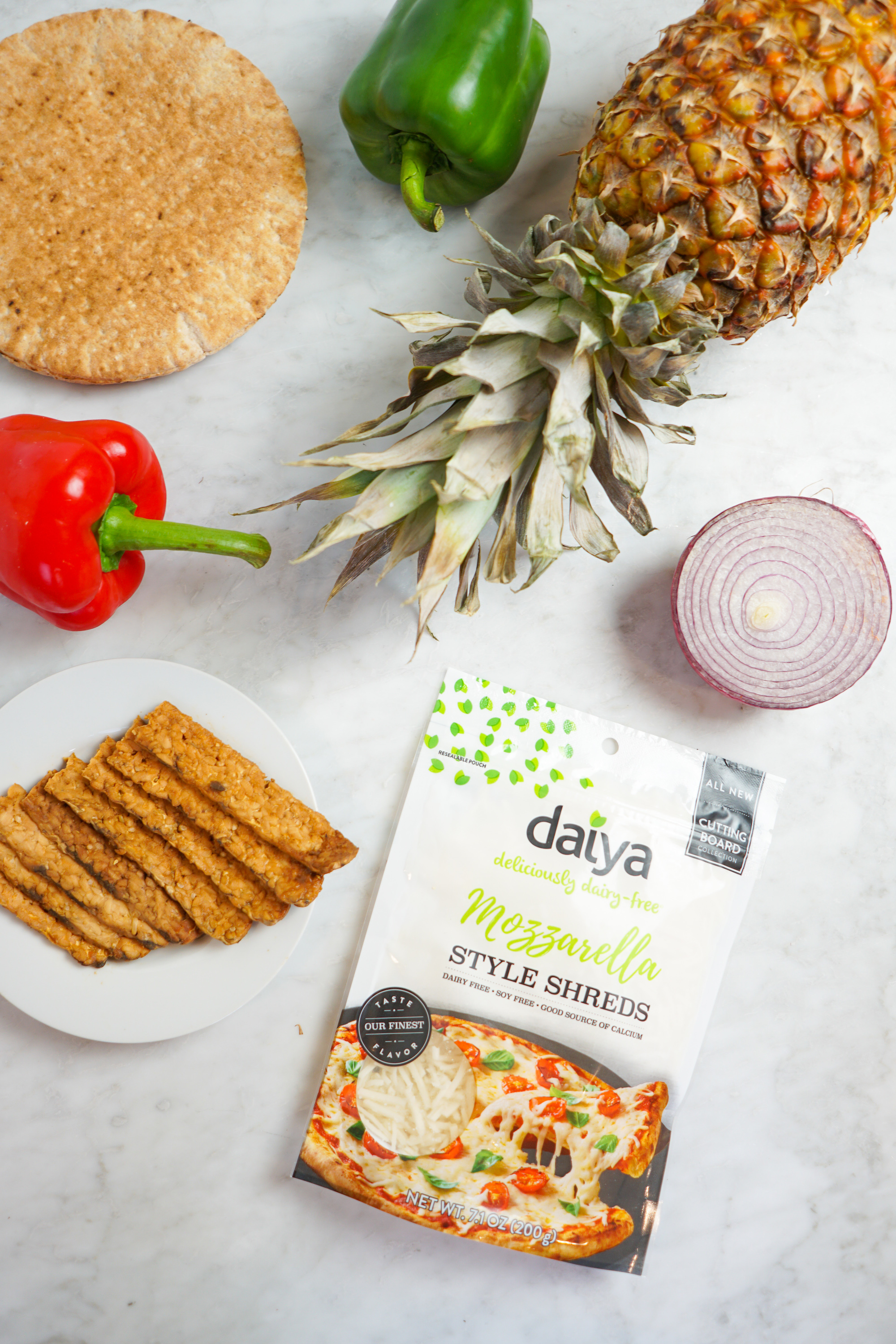 They take about 15 minutes to make and are packed with nutrition. Hearty whole grains from the pita, nutrient dense plant-protein from the tempeh, and a smattering of fresh fruit and veg mean that these pies are a perfectly balanced meal.

You can marinate your own tempeh to create the “bacon” flavor or buy a pre-made brand. Same with the BBQ sauce — if you’re ambitious, you can totally make your own. Or you can save time with a low-sugar, organic, store-bought version like I did. 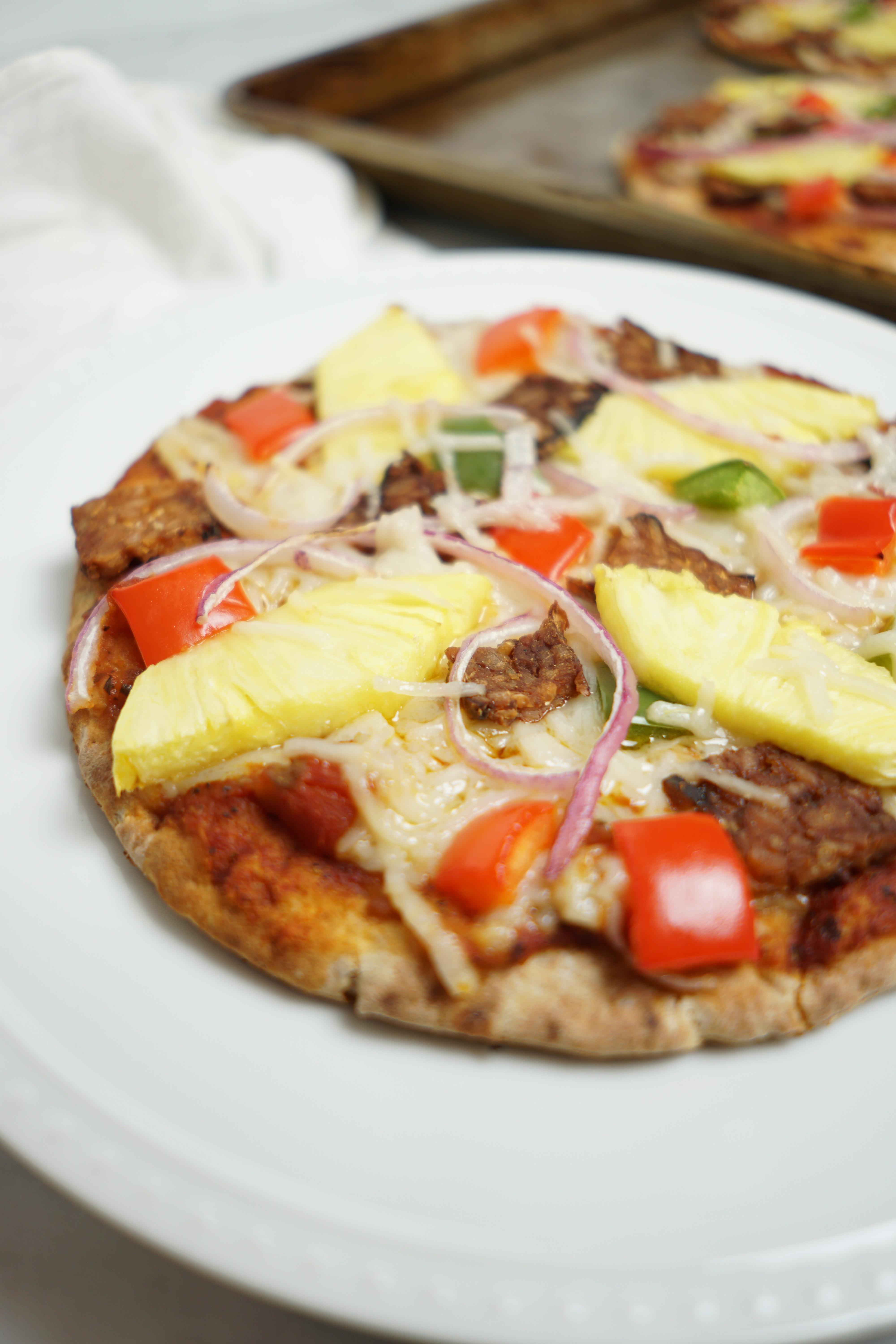 Any way you go, you’re guaranteed to get a mouthful of pizza approval from your fellow diners. I certainly did when the hubs announced that these were the best pita pizzas I’ve ever made! 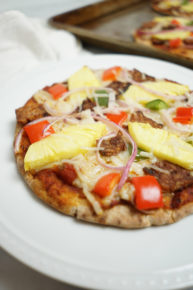 Weigh in: What are your favorite pita pizza toppings? Are you pro or anti pineapple pizza?

*This post is sponsored by Daiya but all opinions are my owns. To find your nearest Blaze Pizza, click here.