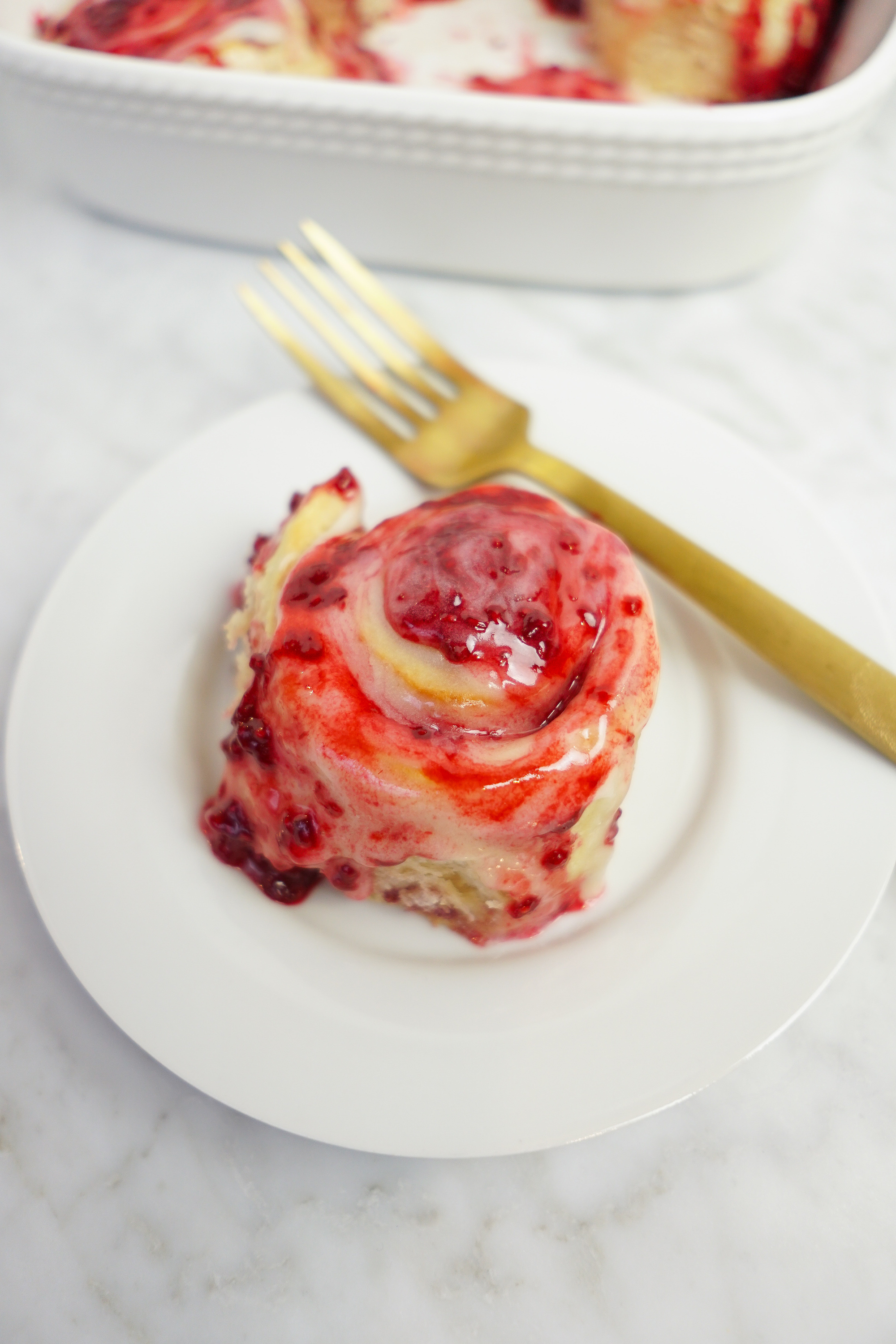 On the list of my top indulgences, cinnamon rolls rank pretty high.

Scooping up a big, buttery roll from Cinnabon at the airport during our yearly family vacation is one of my fondest childhood memories. The smell, the anticipation, the joy of sharing it with my sister (heaven help my parents if we’d each eaten one of those monstrous, sugar bombs on our own), cinnamon rolls will always have the ability to bring a smile to my face.

Every time I’ve tried to recreate this magic at home, however, it’s been a disaster. The rolls were too dense or too crumbly, not sweet enough, or simply didn’t rise. And while I have had many recipes that flop, it’s a much harder pill to swallow when you’ve spent 2+ hours working on it. Anyone who has made cinnamon rolls before knows they’re quite the process! 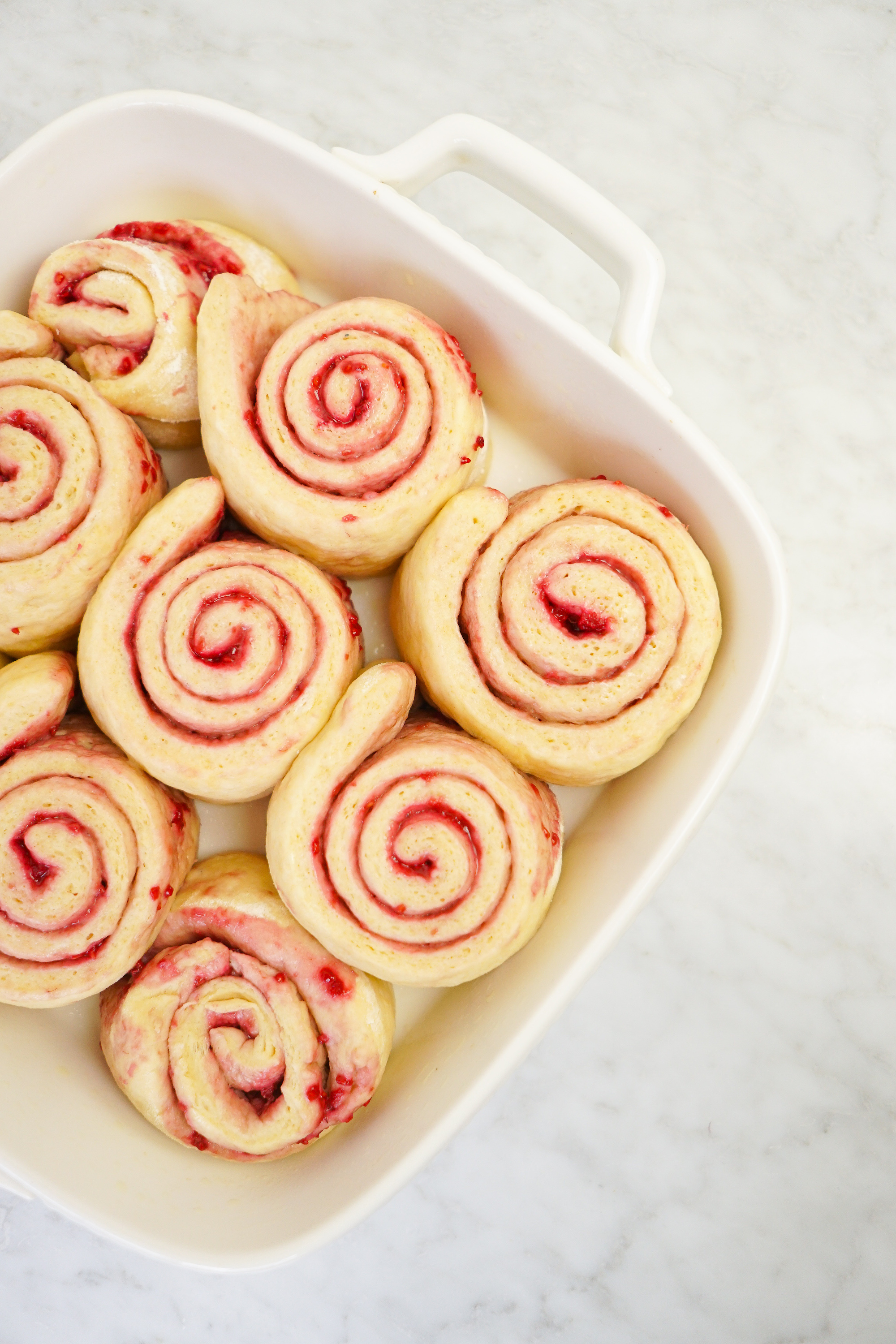 With the defeat of those previous attempts seared in my brain, I haven’t had the desire to try to make them again – until now.

We were having friends over for a playdate and the hubs suggested I take a stab at cinnamon rolls. I warned him about my prior history and the amount of time it would take to execute them and he said he had all the time in the world (oh, husbands J).

So I got up the courage to try them again. 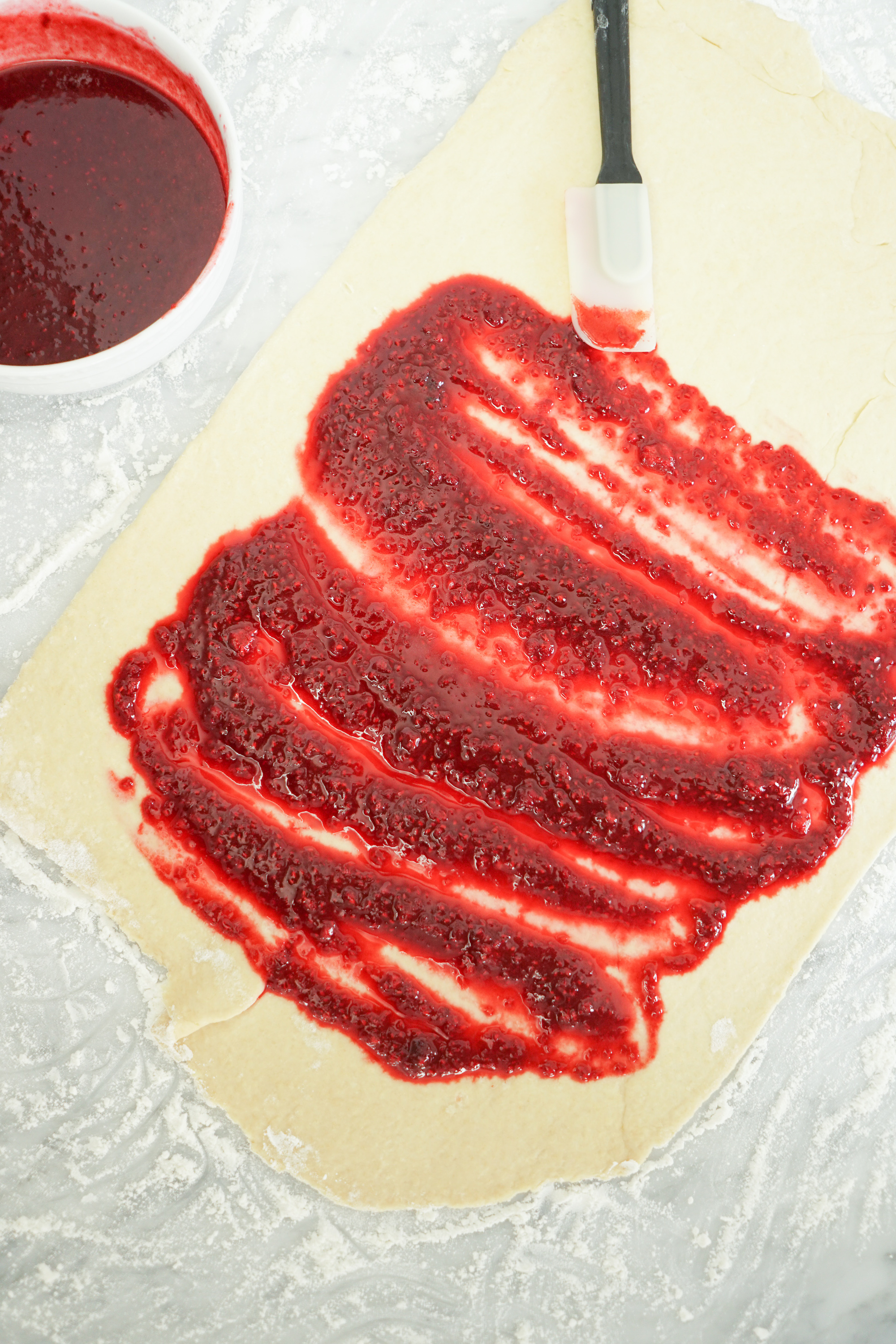 This time, instead of trying to severely modify a recipe, I just made a few fun tweaks to add a little more pizazz to your traditional cinnamon roll.

Frozen vs. Fresh Produce – Is There A Difference? >>

I also did my recipe research and learned a few tricks to make the process as simple as possible. 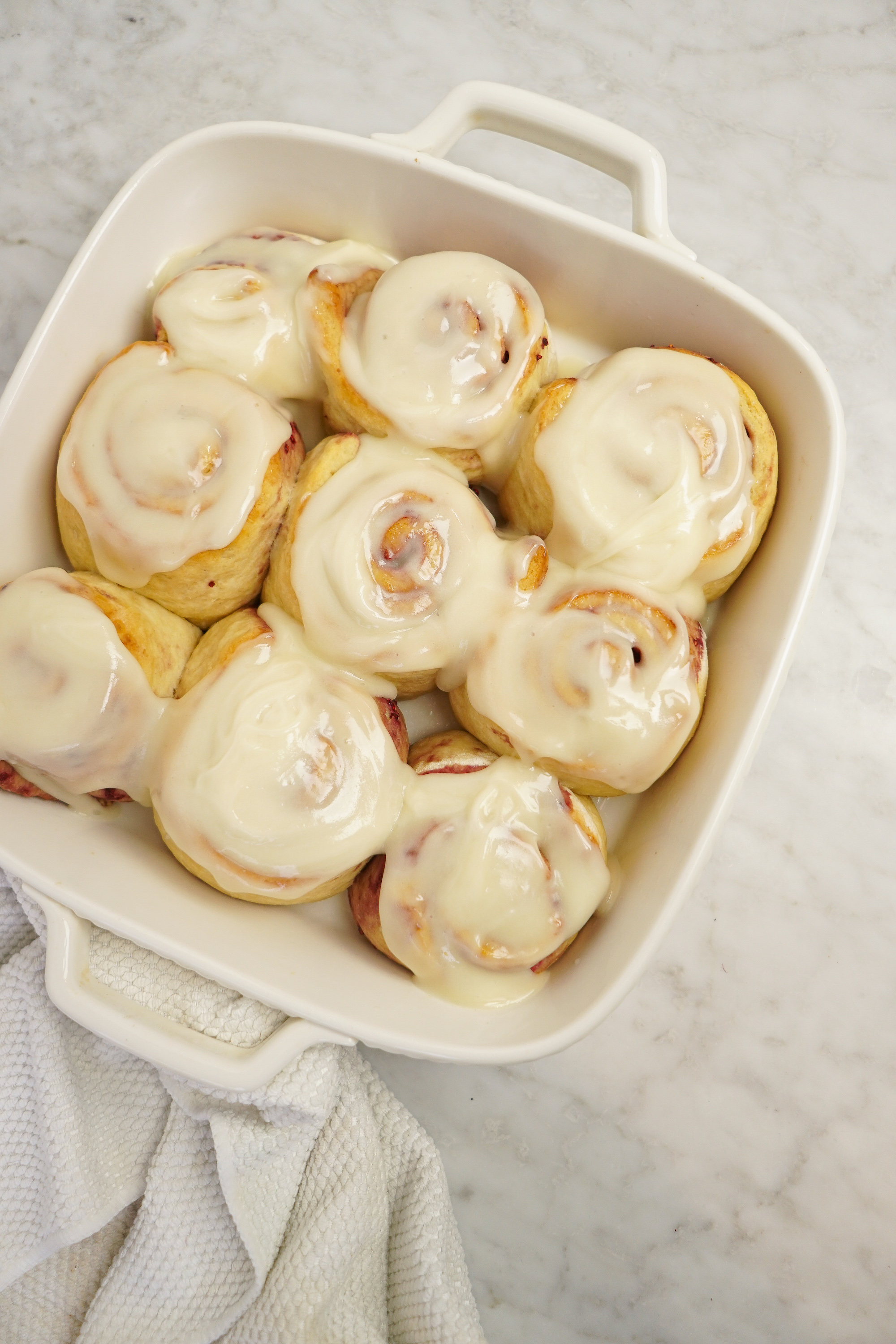 The result? These fluffy, ever so sweet, raspberry vegan cinnamon rolls. They were as close to perfect as I could have hoped for!

The rolls were a big hit at our play date for the babes and adults alike. Unfortunately, C couldn’t have any (we try to stick to the no sugar before age two rule), but he did get to suck on some frozen raspberries and was pretty stoked about that.

I’m glad the hubs pushed me to give these buns another go and will be adding this easy, tasty recipe to my brunch repertoire.

If you’re looking for an impressive, breakfast treat, I recommend you give these babies a try.

Feel free to leave off the vegan cream cheese frosting if you like – the raspberry sauce is pretty scrumptious on its own. You’ll also likely have raspberry sauce leftover. Save it to spread on toast, pancakes, or waffles! 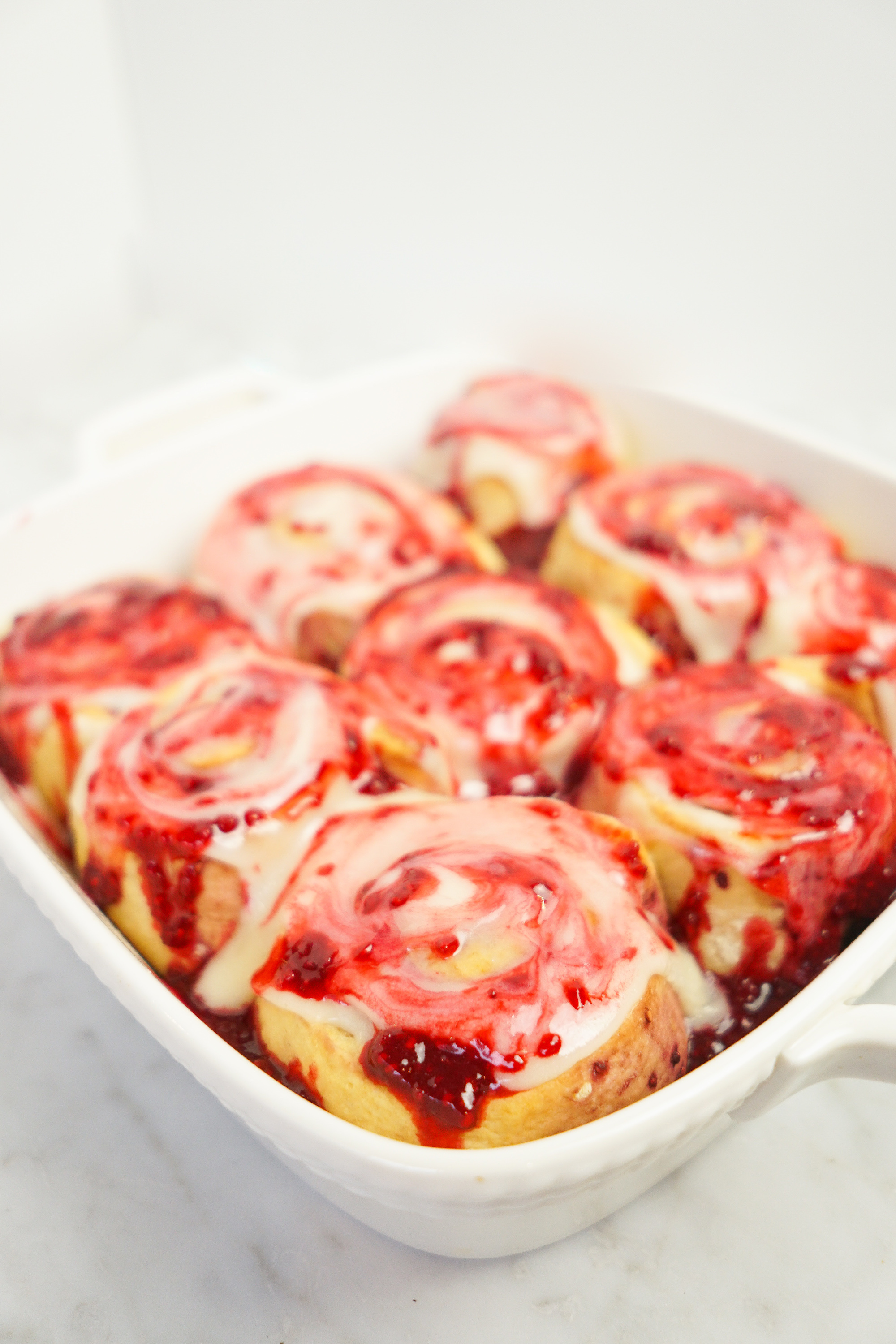 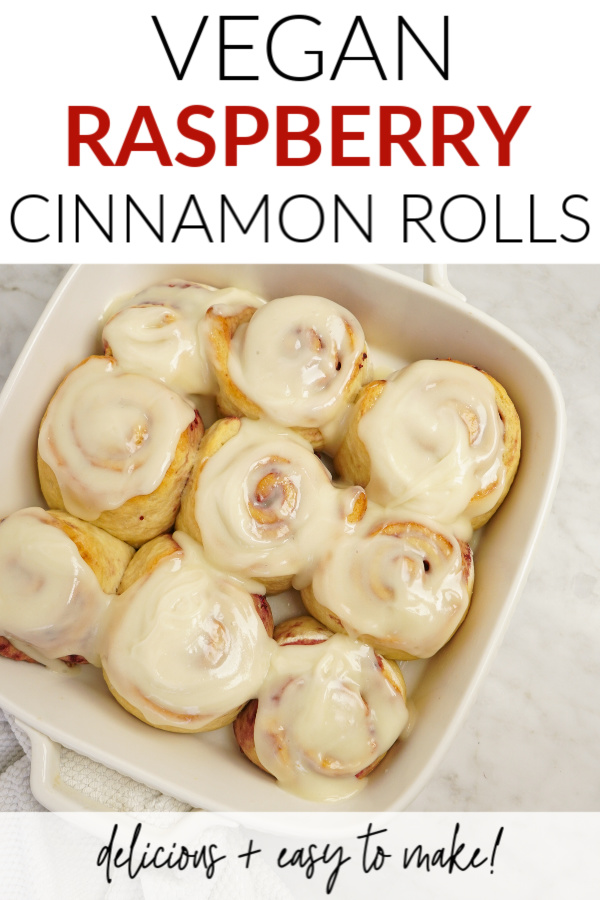 *This post is sponsored by the National Processed Raspberry Council but all opinions are my own. I thank you for your support of Whitney E. RD-approved recipes that make this website possible.