Whether you’re plant-based or not, this vegan green bean casserole is a delicious, nutritious addition to your Thanksgiving table! 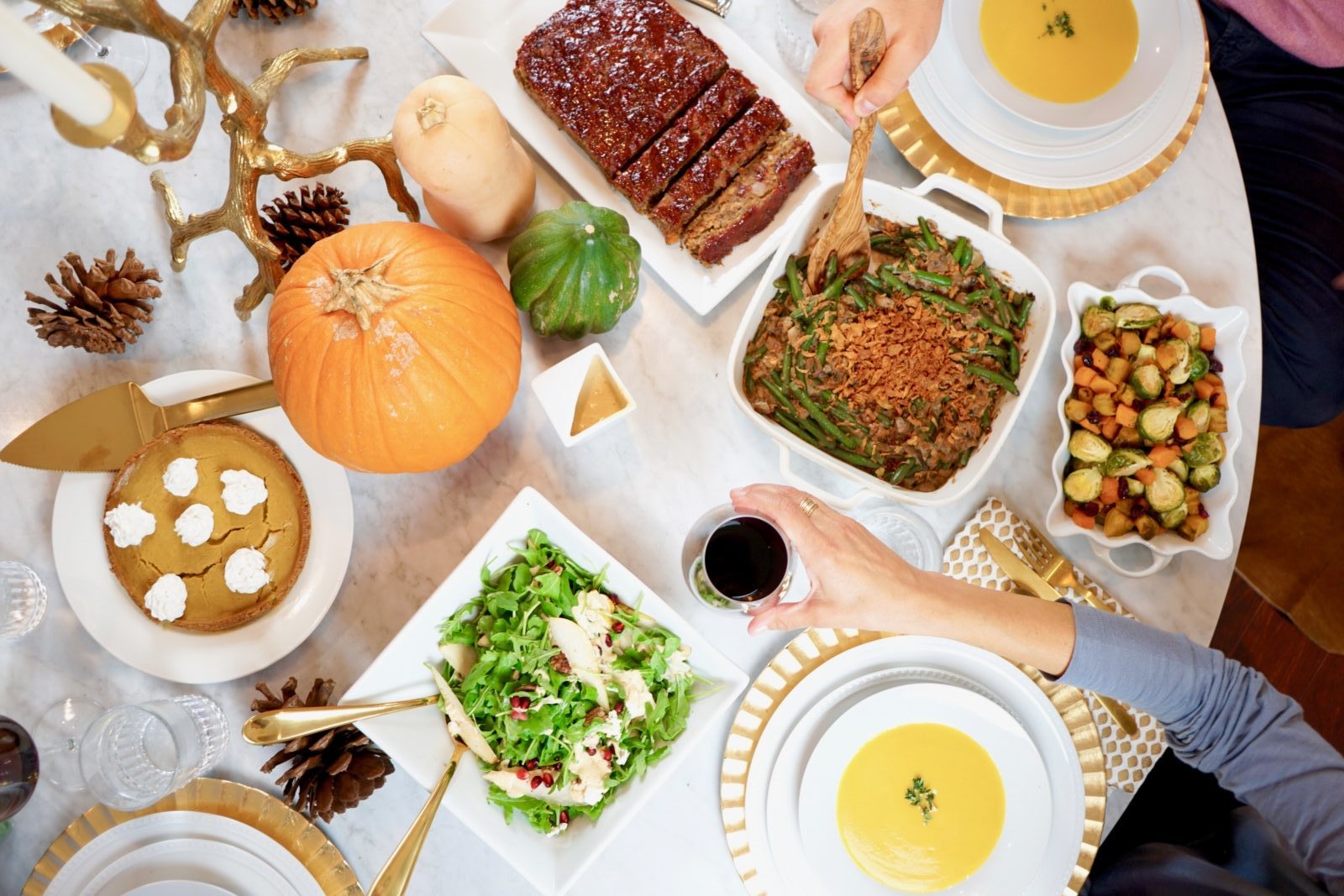 I’ve had a lot of Thanksgiving green bean casseroles in my day. 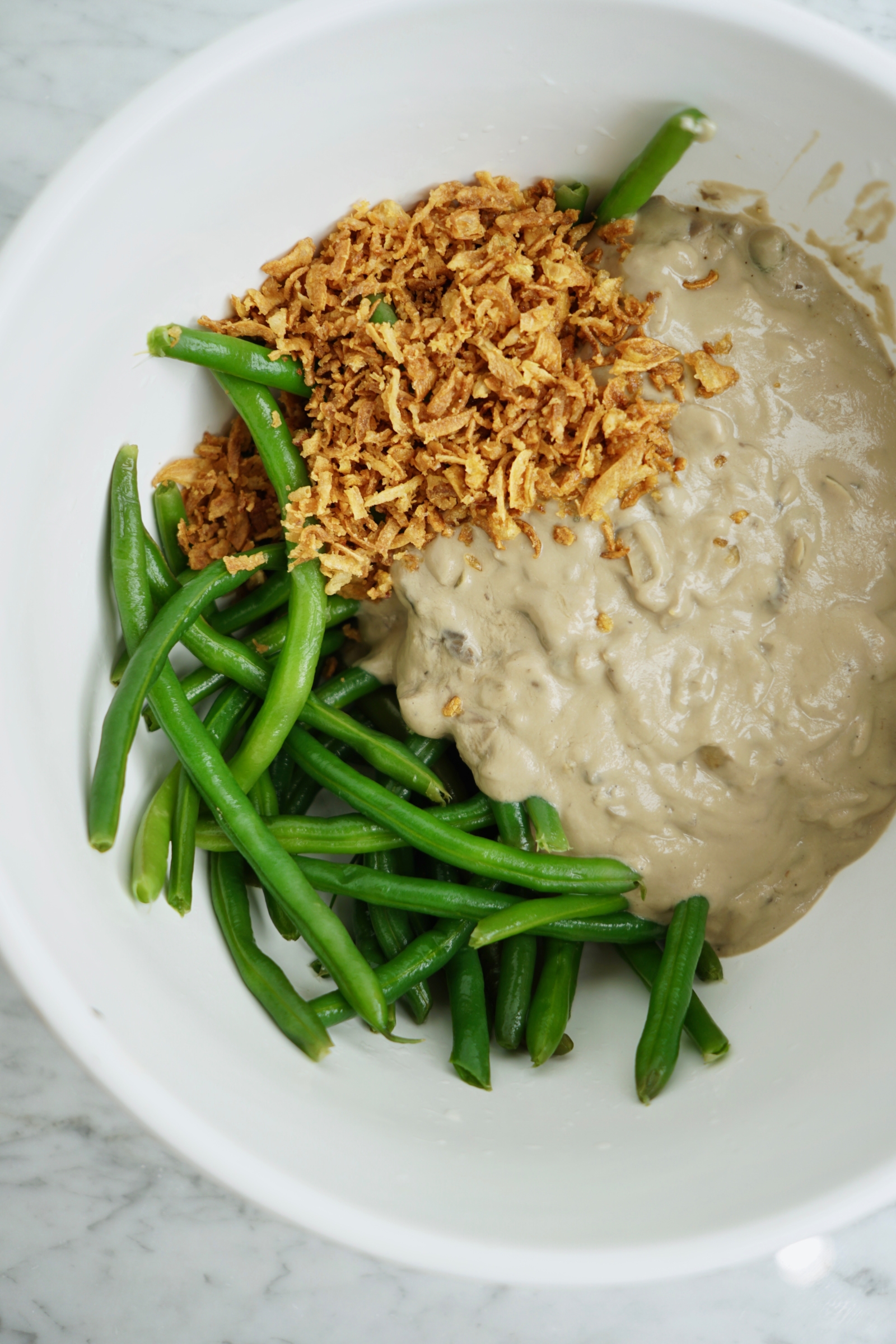 This year, for a Friendsgiving dinner I hosted, I wanted to bridge the gap between these green bean varieties and produce a dish that was simultaneously nutritious but also as rich, creamy, and indulgent as a classic casserole. 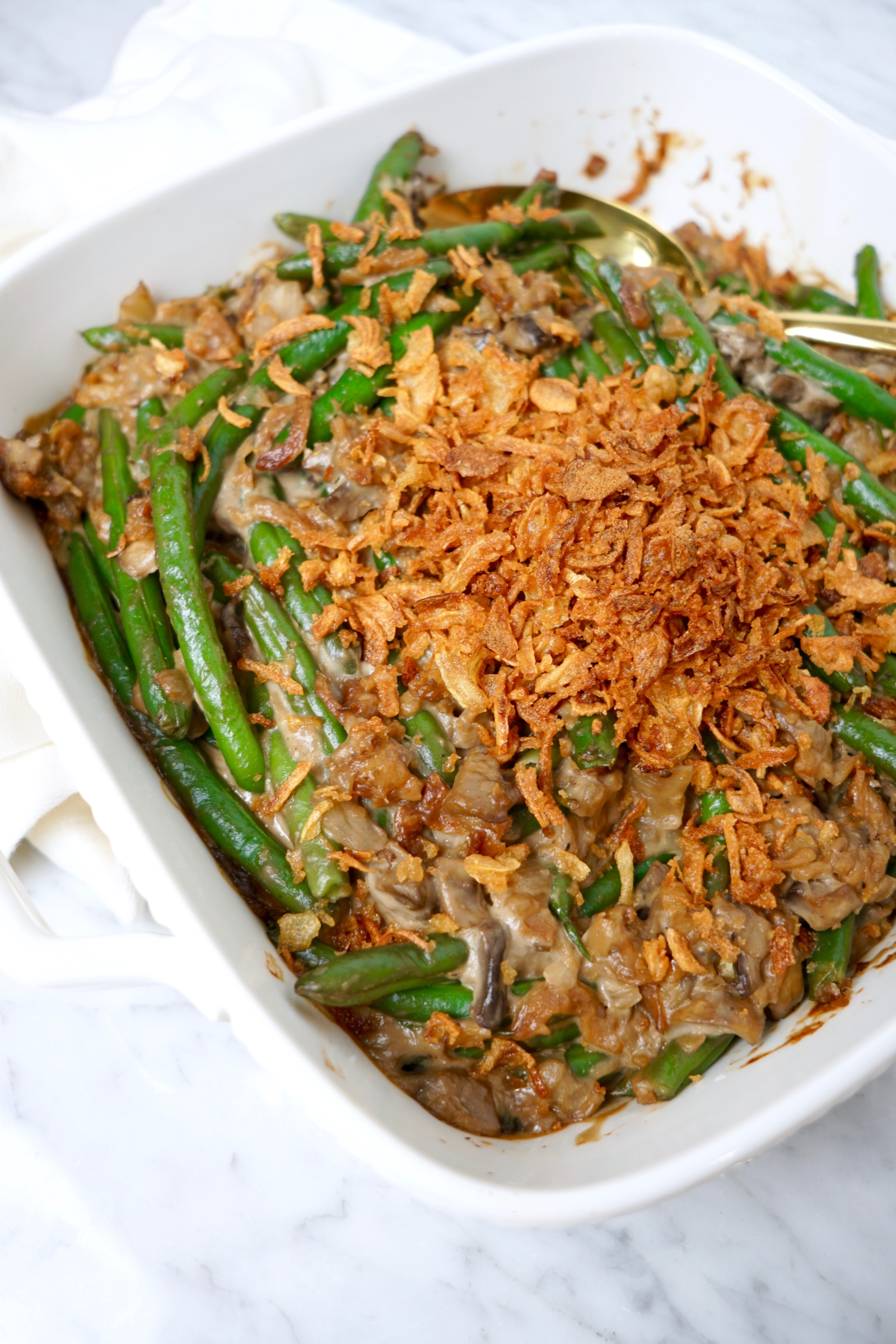 To throw in another criterion, I also wanted to create a vegan green bean casserole.

Initially, I was discouraged when I couldn’t find any premade vegan cream of mushroom soup. However, it turns out that it’s actually very easy to make your own. 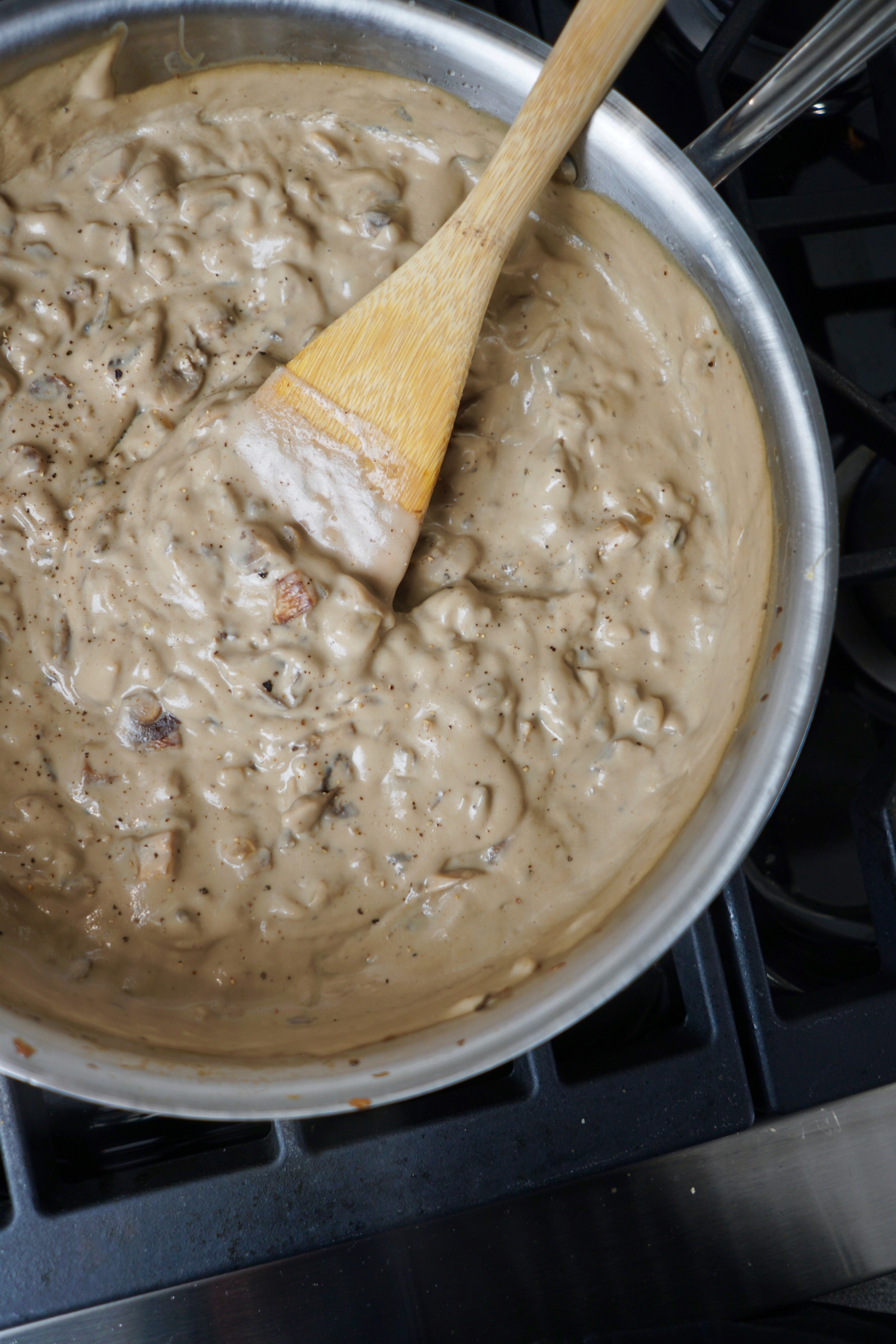 Using six simple ingredients (aside from standard spices and oil), this green bean casserole is as creamy and delicious as the dairy-packed original.

While it does take about an hour to make, the steps are very simple and the prep time is under 3o minutes. 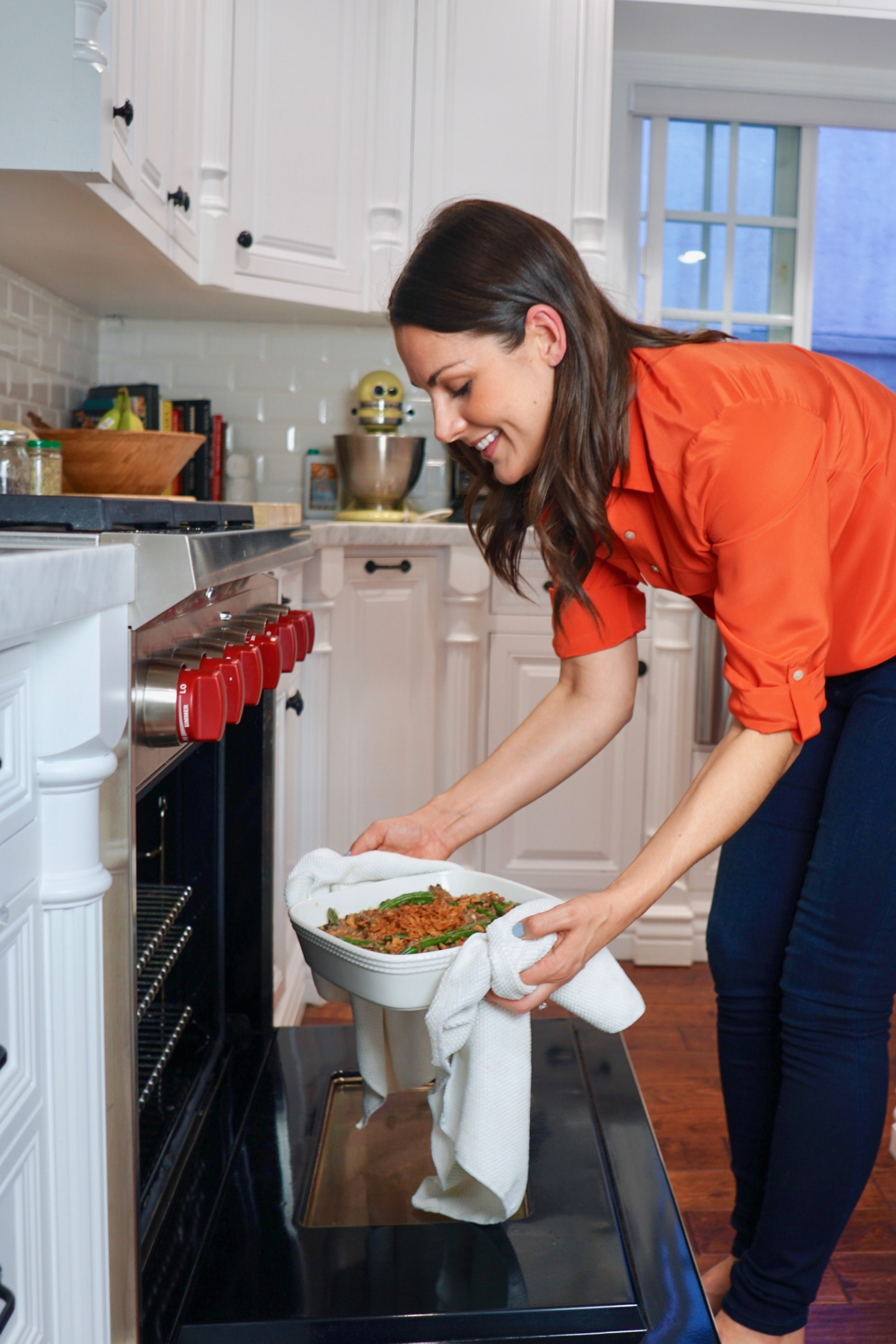 A couple of time-saving tricks I used to cut back on prep included using prewashed and trimmed organic green beans from Taylor Farms and buying pre-made vegan fried onions. 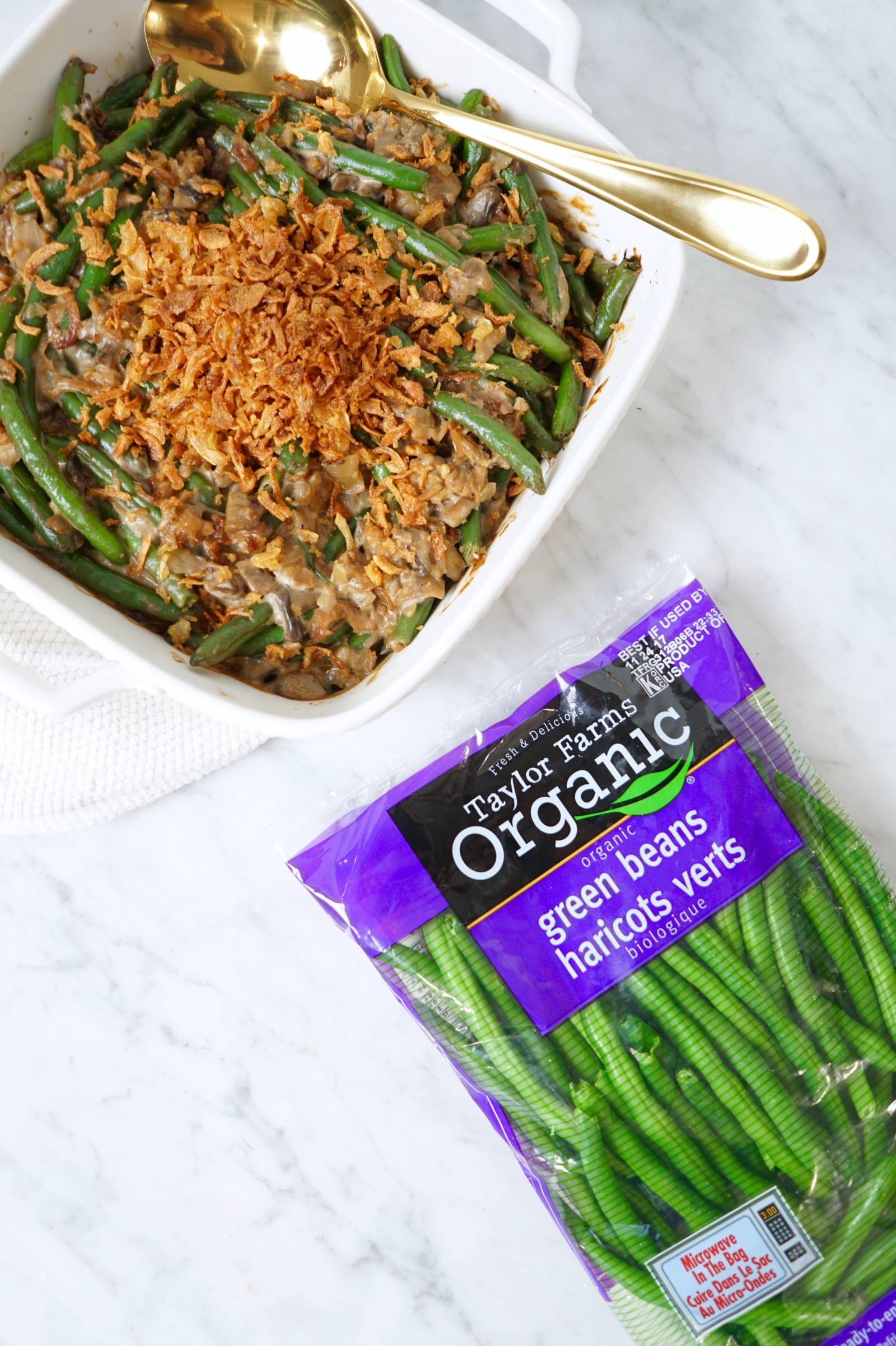 You can totally go the extra mile and fry your own green beans, but I personally have to draw the line somewhere, and onion frying is it.

I went basic (and cheap) with white button mushrooms for the sauce, but you can get fancy with portobellos or shiitakes if that’s your style. 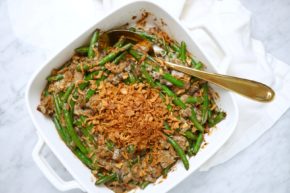 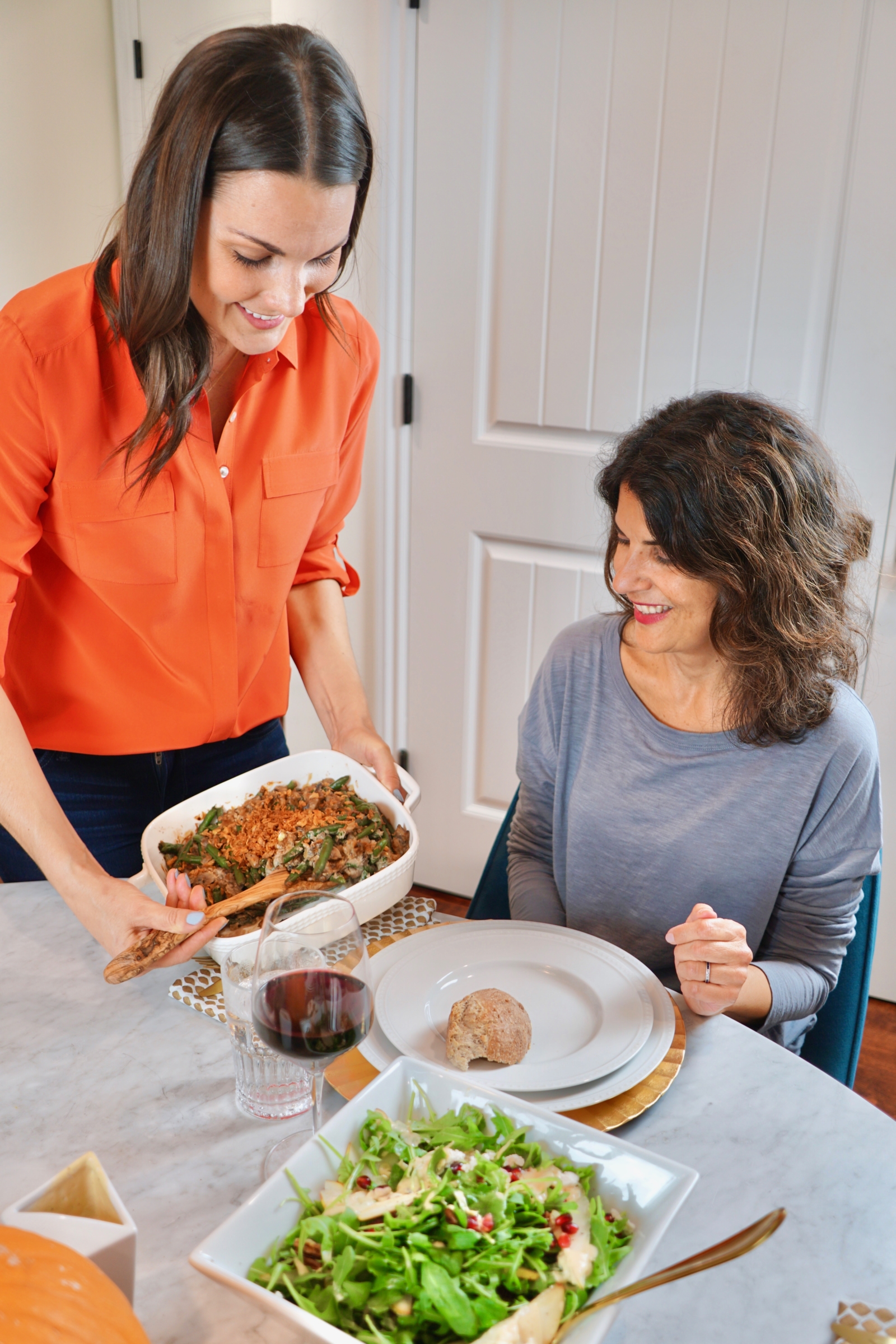 The casserole turned out fantastic and my husband raved about its decadent flavor.

He couldn’t believe that it (or the rest of the dishes on our Friendsgiving table) were totally vegan. 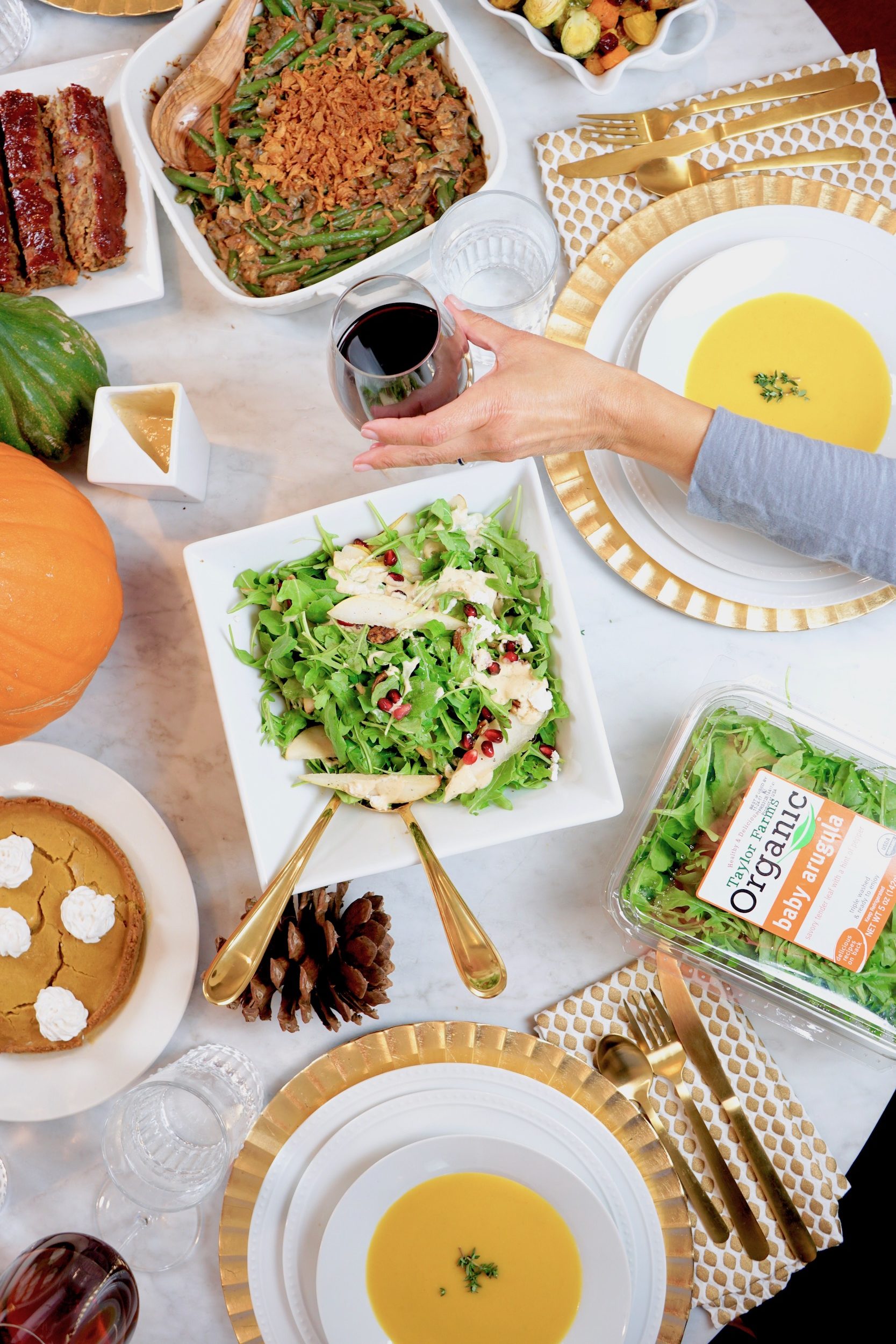 The spread also included my Lemongrass + Ginger Butternut Squash Soup and two recently upgraded #whitskitch recipes: my Thanksgiving Lentil Loaf and Sweet + Savory Thanksgiving Veggies. Both will be coming to the blog later this week. 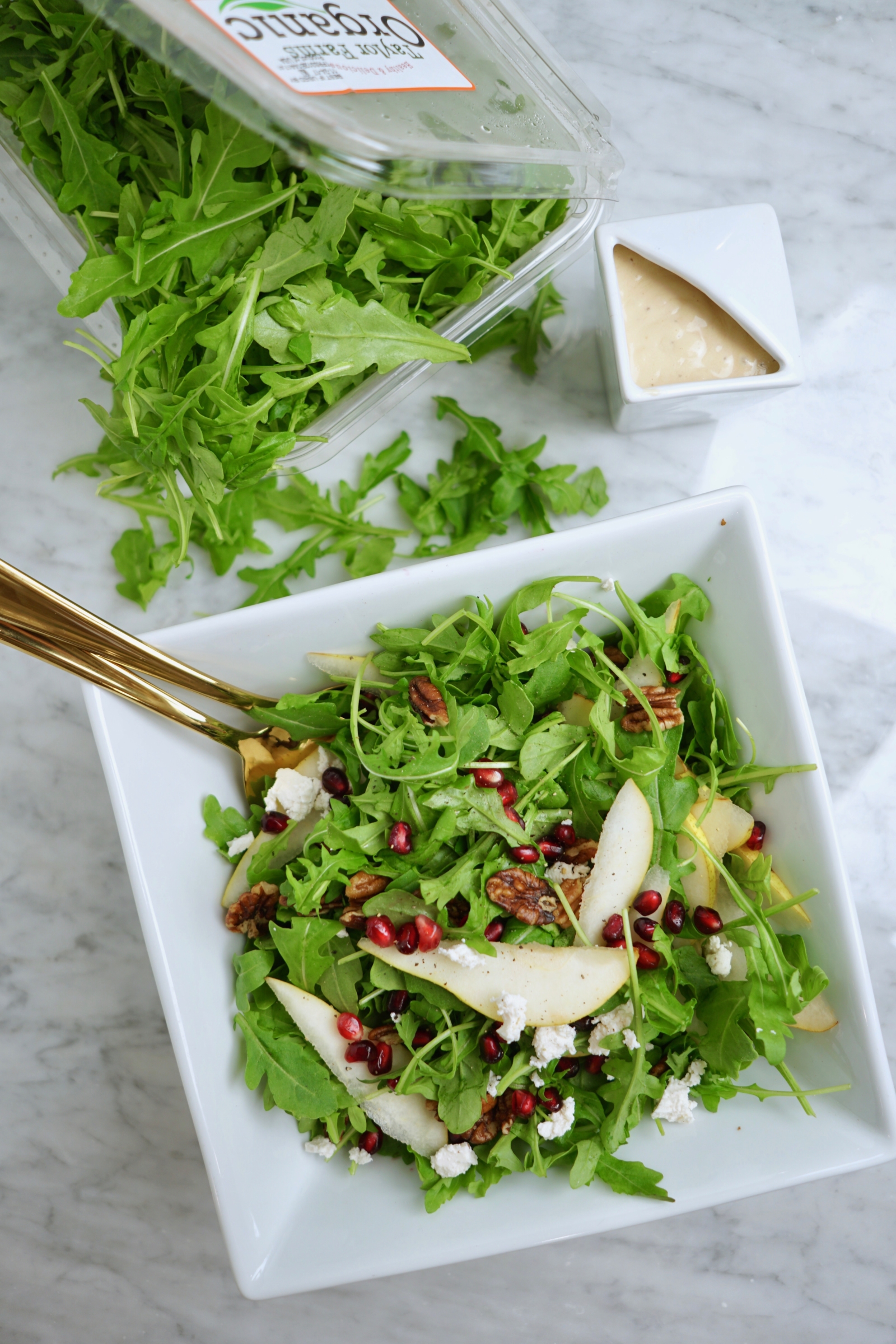 I think a light festive salad is always nice to balance out the heavier dishes on your Thanksgiving table.

This Pear, Pomegranate, and Pecan Salad has a lovely, sweet yet peppery flavor thanks to the pungent arugula leaves. 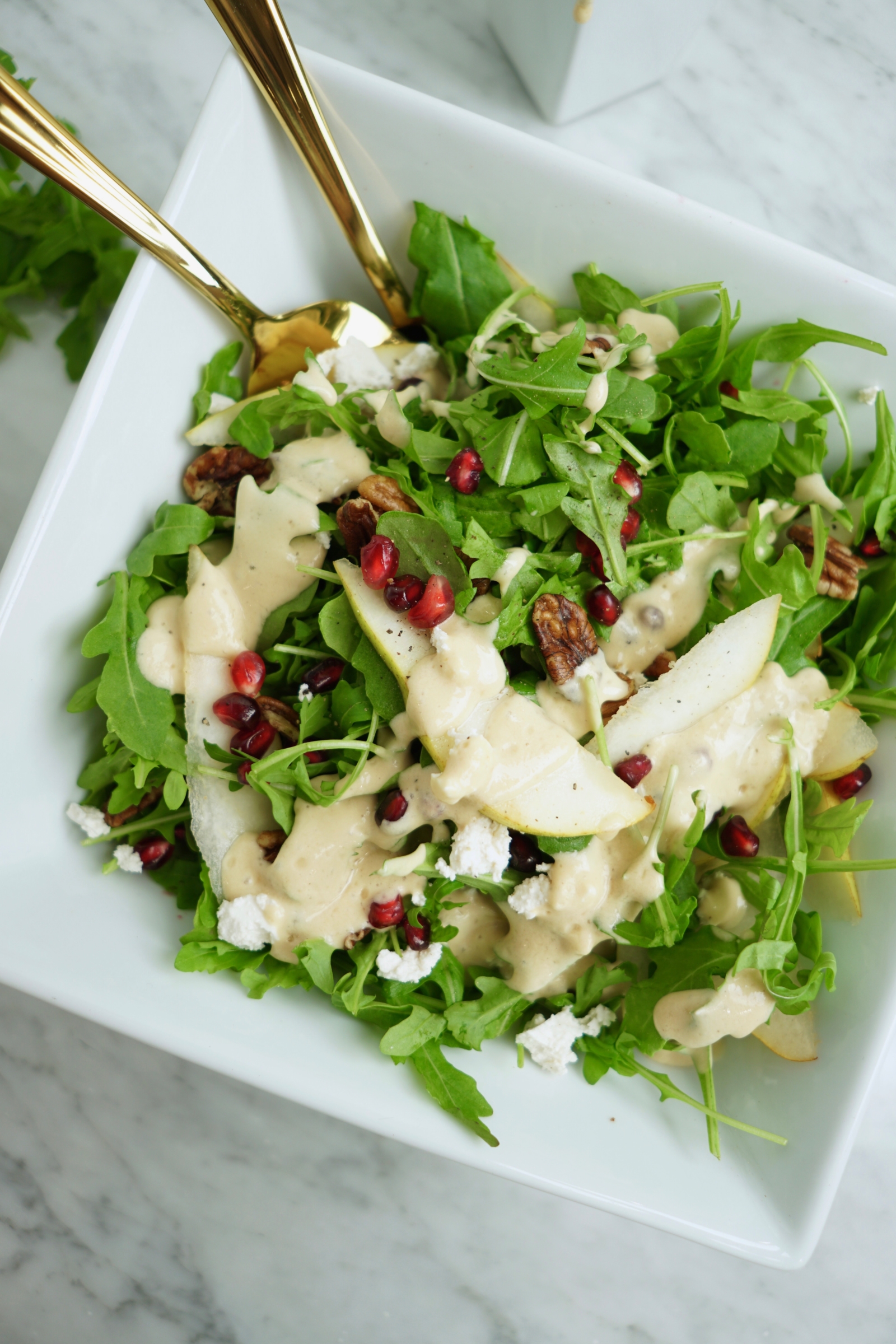 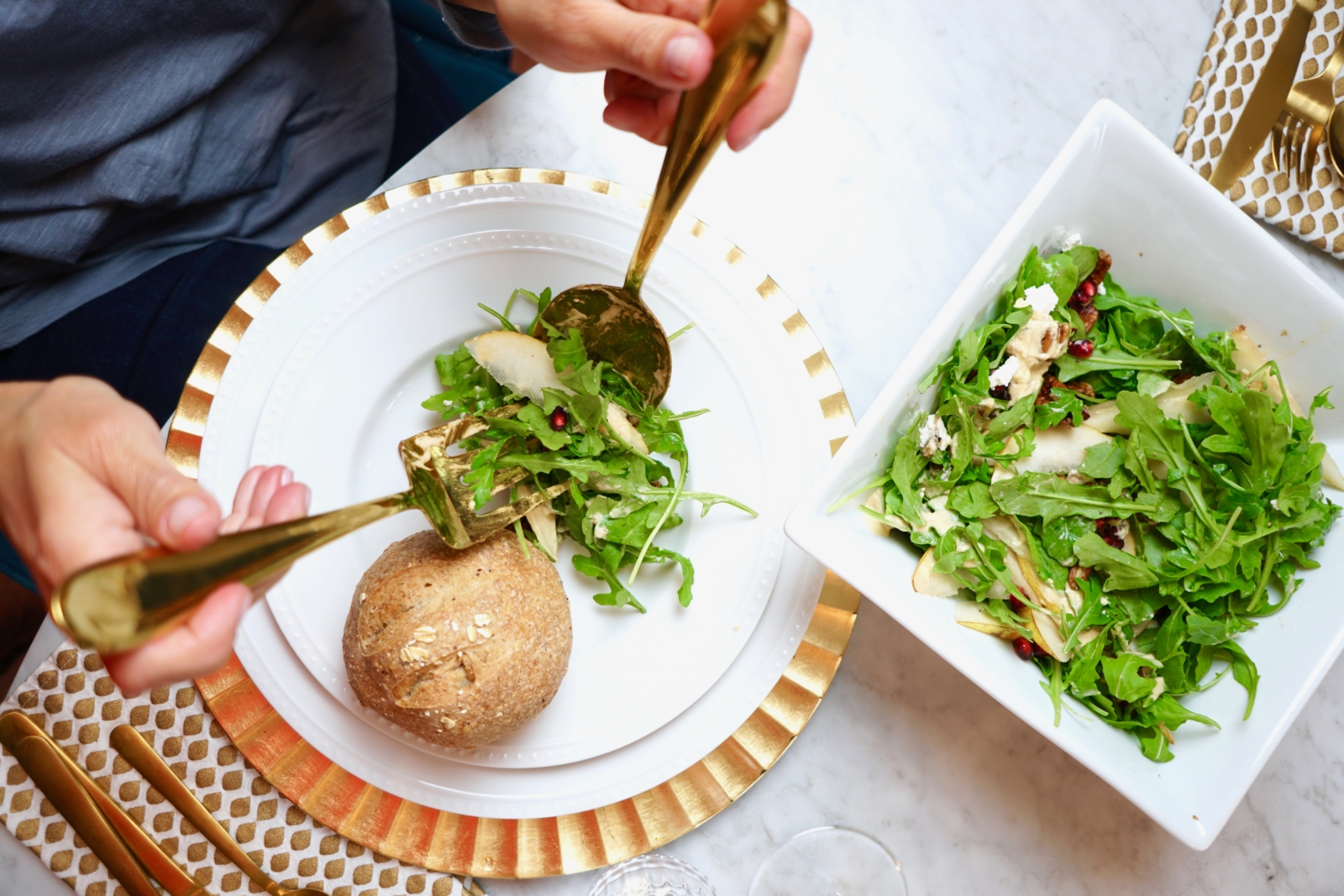 After consuming all of these hearty vegan dishes, we barely had room left for dessert, but naturally, we made some.

I found a vegan pumpkin pie and plant-based whipped cream at the grocery store to finish off the feast and we enjoyed it while catching up on Curb Your Enthusiasm.

It was a perfect pre-Thanksgiving feast without an animal in sight. Well, except for Mr. Chow, who was keeping a close watch for scraps. 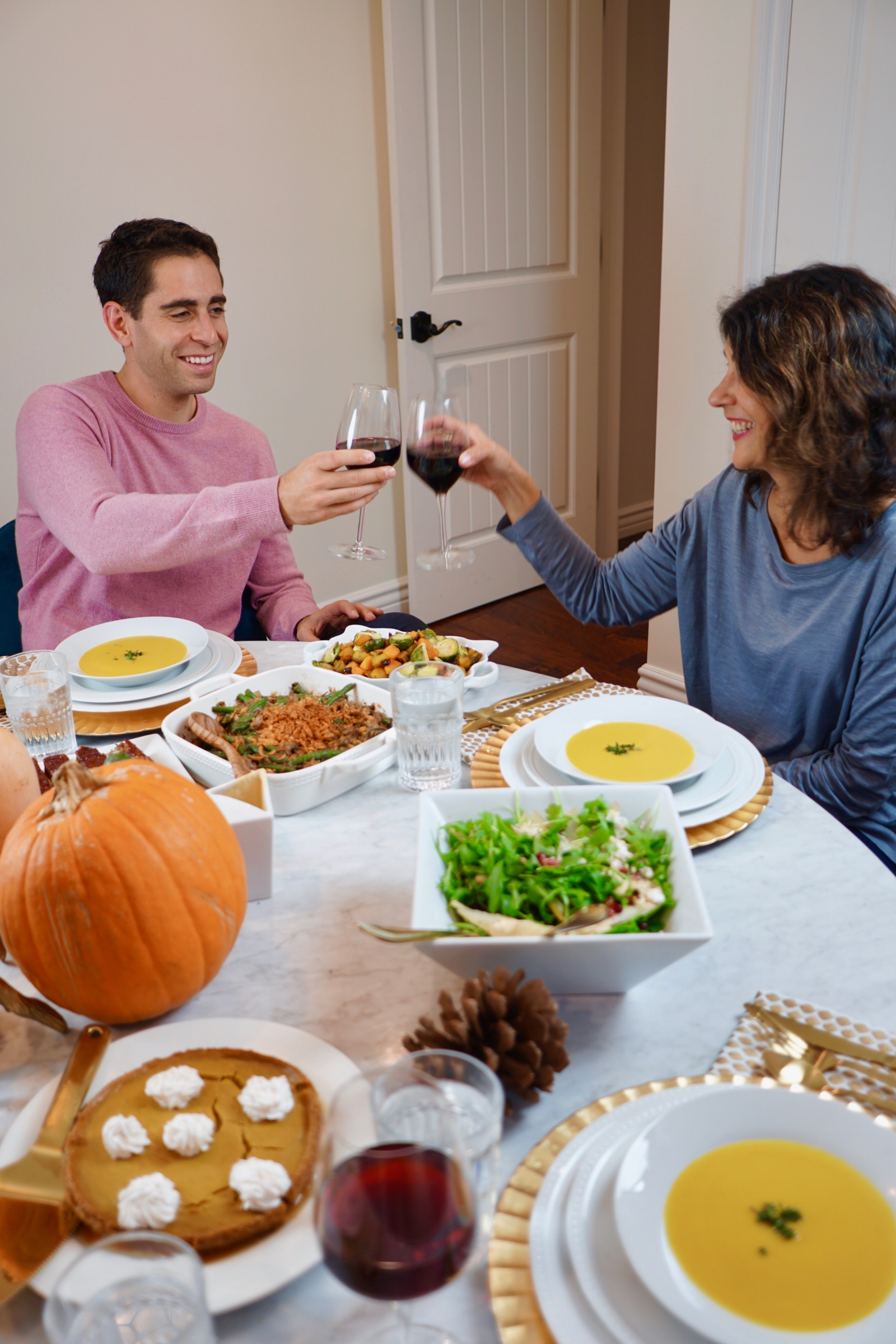 Whether you and your family are vegan, Predominantly Plant-Based, or adventurous omnivores, I highly encourage you to try a few of these delicious dishes to add some nutritious flavor to your holiday table.

And stay tuned this week for the rest of my plant-based Thanksgiving recipes! 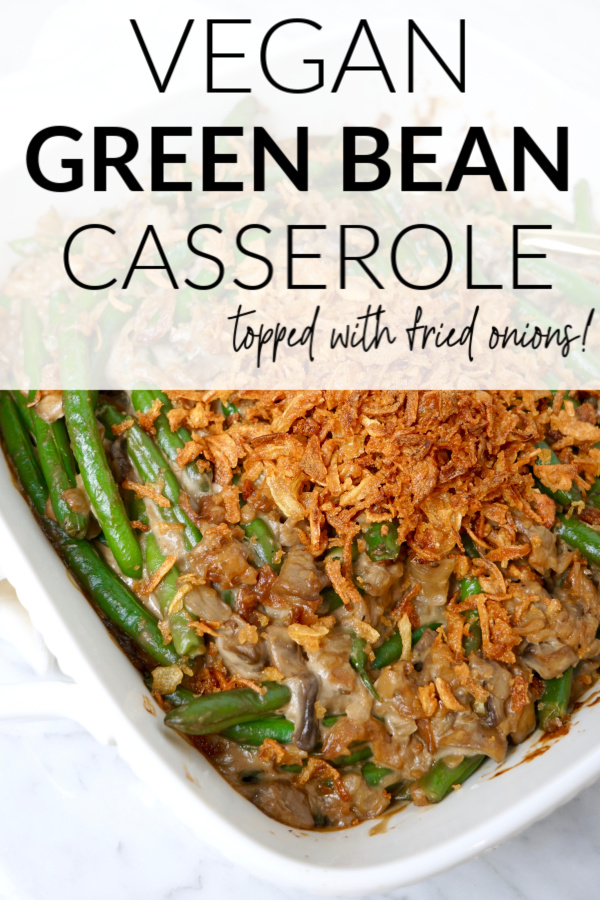 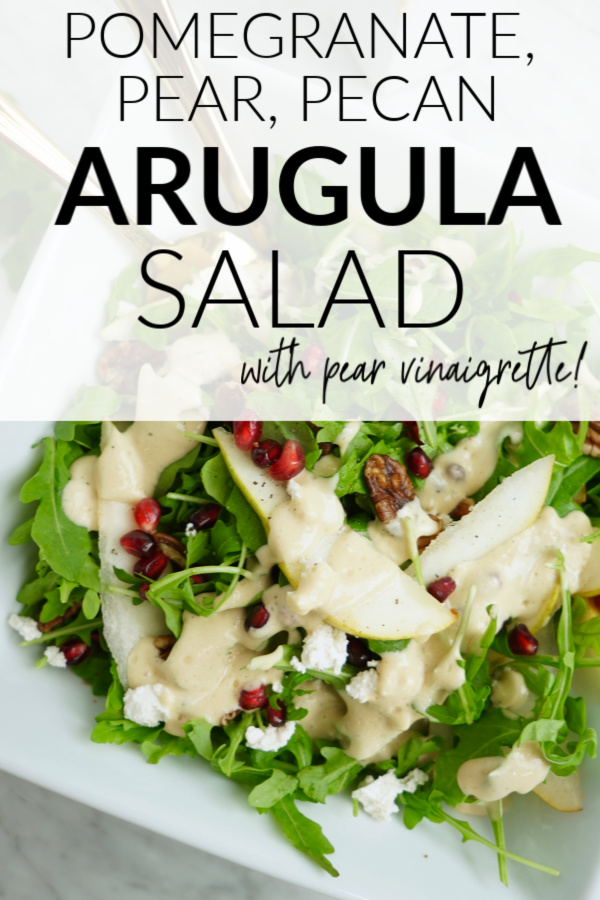 Weigh-in: Will you try this vegan green bean casserole for your Thanksgiving table?

*This post is sponsored by Taylor Farms but all recipes, photos, and opinions are my own.

- Whitney
IF YOU’RE INSPIRED TO MAKE THIS VEGAN GREEN BEAN CASSEROLE, MAKE SURE TO SNAP A PIC AND TAG #WHITSKITCH - I'D LOVE TO SEE!