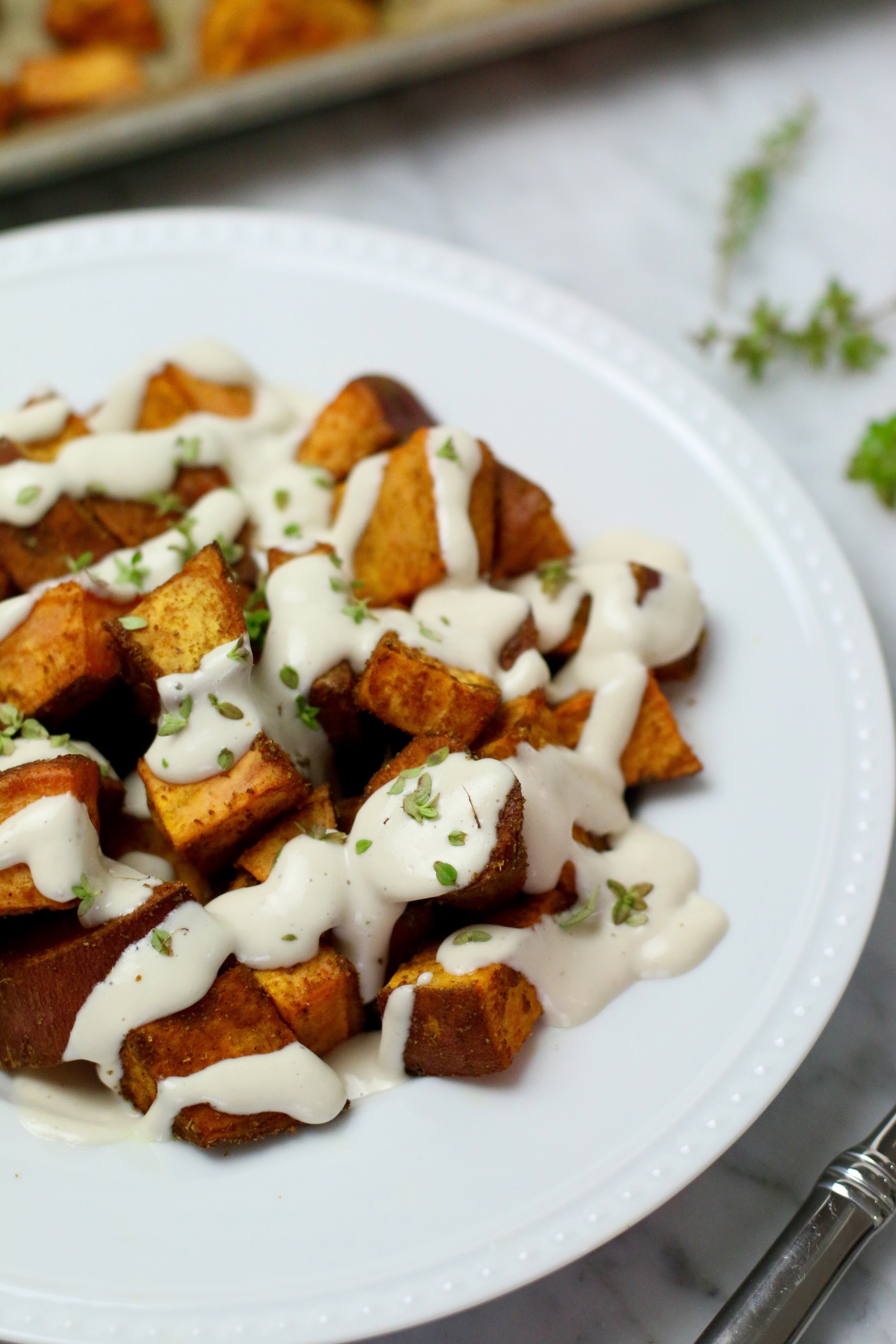 How early is too early to start bombarding you guys with sweet potato recipes?

If it were up to me, this blog would be a year-round carousel of bright orange awesomeness.

I know that sweet potatoes aren’t for everyone though, so I do my best to at least corral my obsession to the few months that actually warrant non-stop sweet potato exposure. 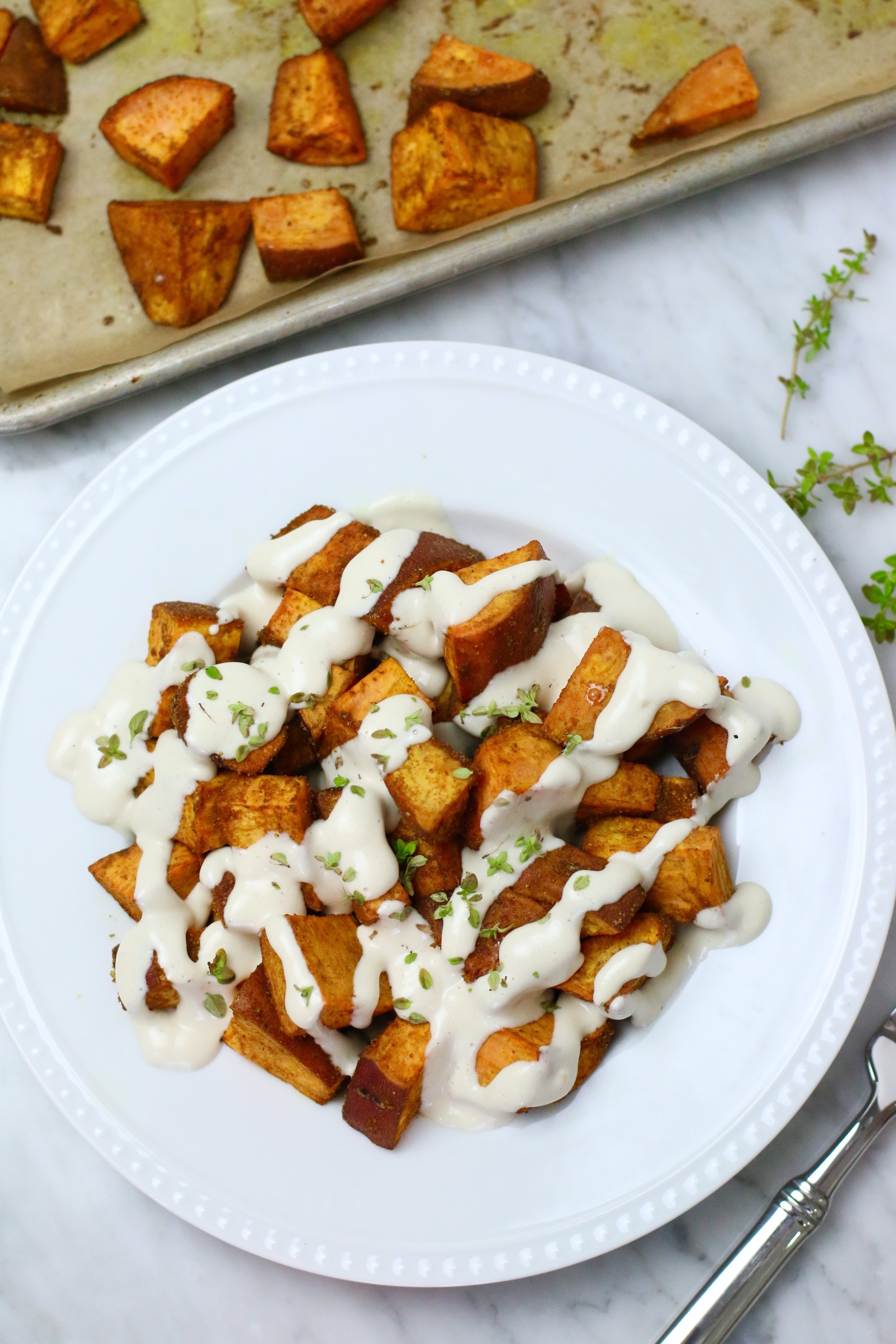 I know I’m a little early this year, as fall is still about a month away, but I just couldn’t keep this delicious recipe to myself for that long.

These roasted Spiced Sweet Potatoes, slathered in a slightly sweet Coconut Cashew Cream Sauce, are the stuff foodie dreams are made of. 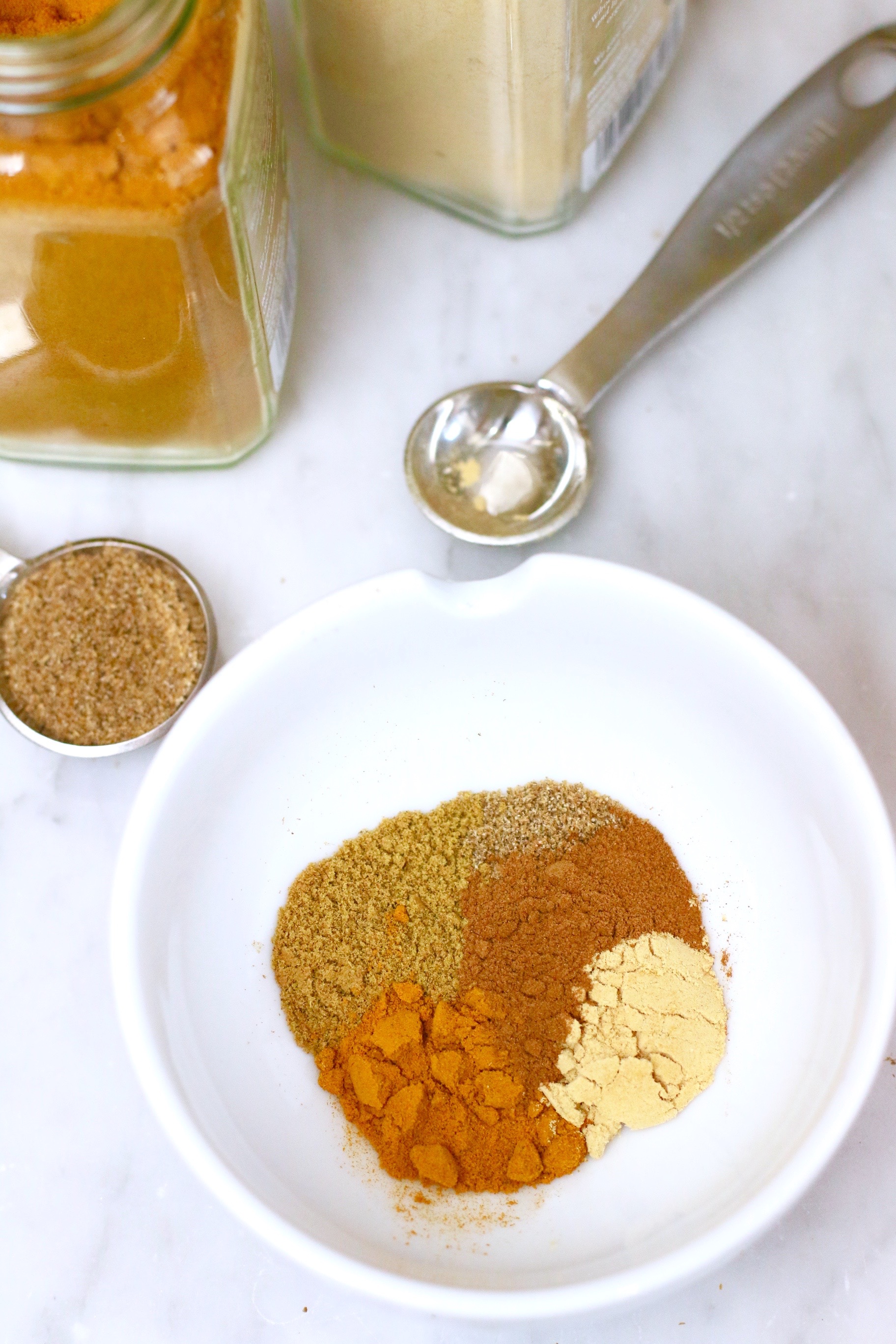 To balance the savory and bring out the sweet, they’re topped with a melt in your mouth sauce made from silky coconut milk and creamy cashews.

Lavender salt is the secret flavor booster in this off beat dish, which adds an interesting aromatic twist to the dish. However, any salt will do.

This recipe was inspired by one of my favorite starters at the popular LA vegan restaurant Cafe Gratitude, the “Comforted” roasted garnet yams. 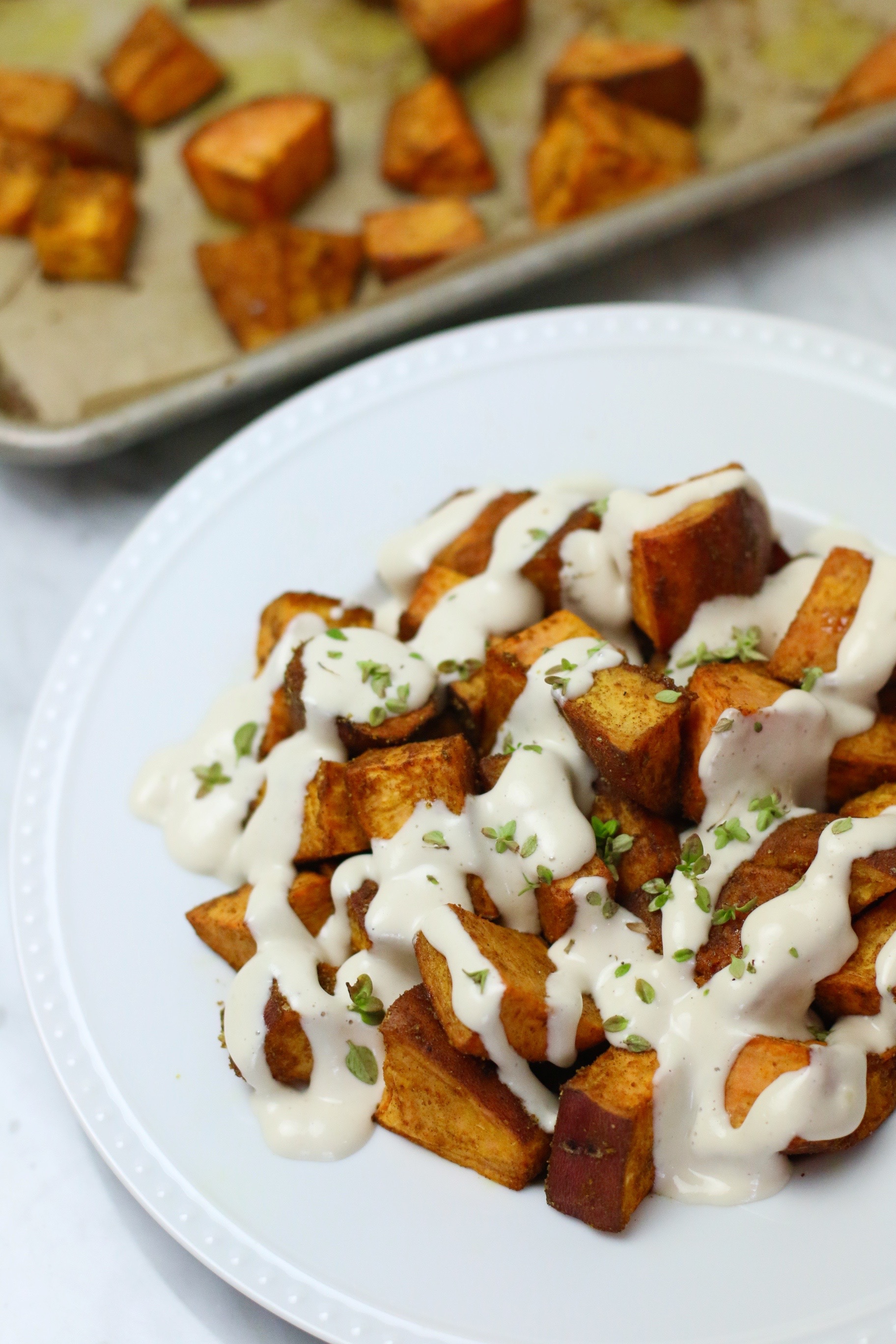 In fact, it was created after an unsuccessful attempt at finding their recipe online one evening when I was too lazy to drive over and pick up take-out. It’s not identical, but I’d call it an equally attractive cousin.

This vegan sweet potato dish is full of nutritional benefits including beta-carotene from the taters (hello antioxidants), monounsaturated fat from the cashews (hooray for heart health), plus a plethora of minerals — copper, phosphorous, manganese, magnesium, and zinc, to be specific.

It makes a great side dish or a satisfying main.

Print
Author: Whitney English
Ingredients
Sauce
Instructions
3.2.2708
If the amount of spices listed is overwhelming, feel free to sub them out for an Indian spice mix.

And if you’re more of a savory foodie, I suggest using regular coconut milk instead of vanilla. My husband falls into that category and he deemed the dish a little too “rich” for his tastebuds. 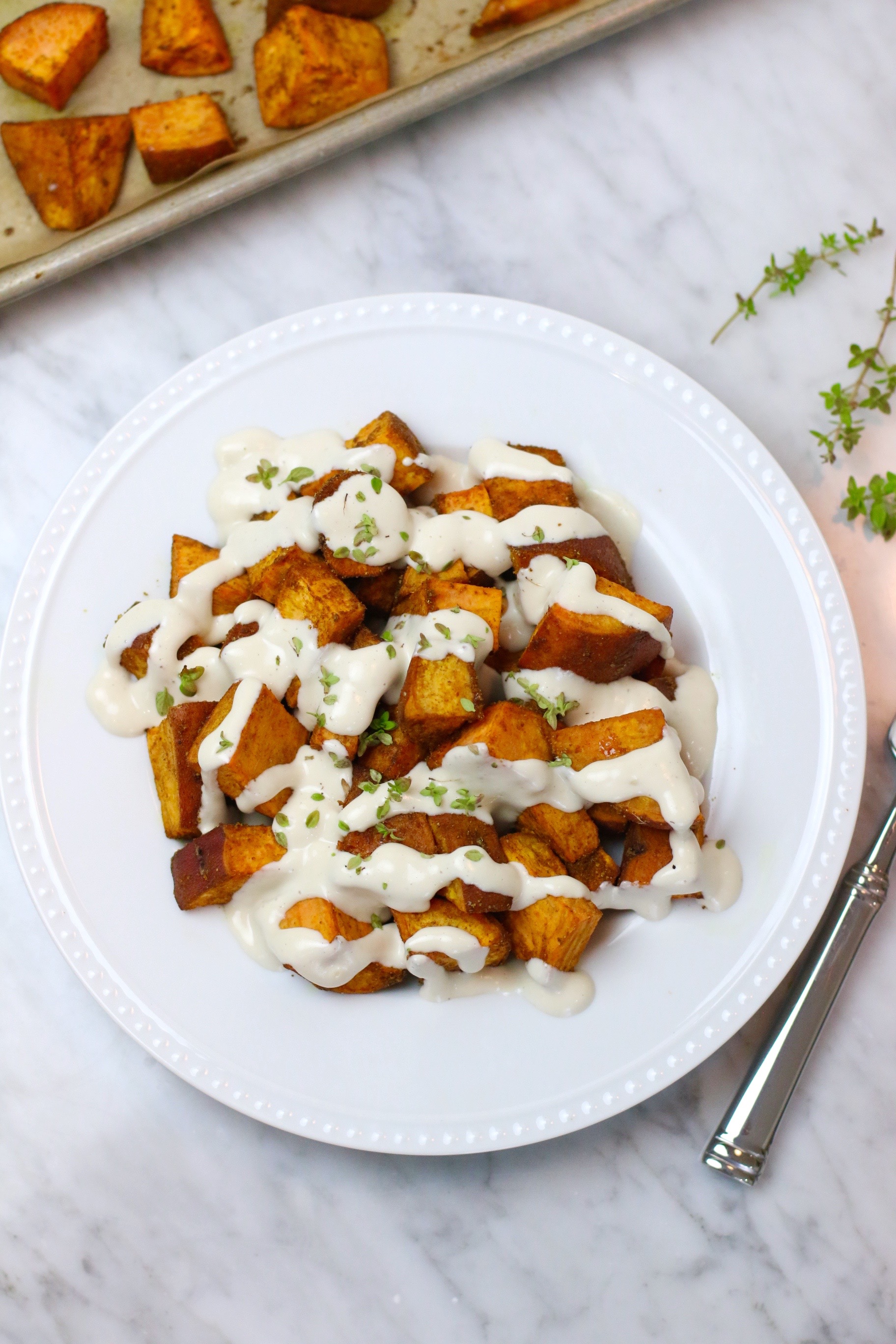 I on the other hand couldn’t get enough of the flavor and deemed this recipe a suitable dish for lunch, dinner or dessert.

Weigh In: Are you ready for sweet potato season? Do you prefer sweet or savory dishes?