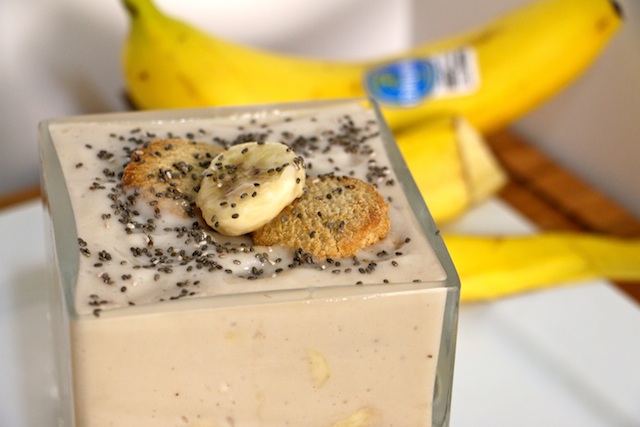 This weekend wore me out.

Starting Friday night, up until yesterday, I had four birthday bashes to attend.

Have you heard of the Berenstain Bear’s Too Much Birthday? That’s what it was. If you haven’t heard of it, I highly suggest you watch the YouTube video. Great cautionary tale.

However, I did manage to stick to mostly healthy meals, continued smuicing, and even came up with an amazing, natural ingredient recipe for my classic Healthy Banana Bread Pudding. 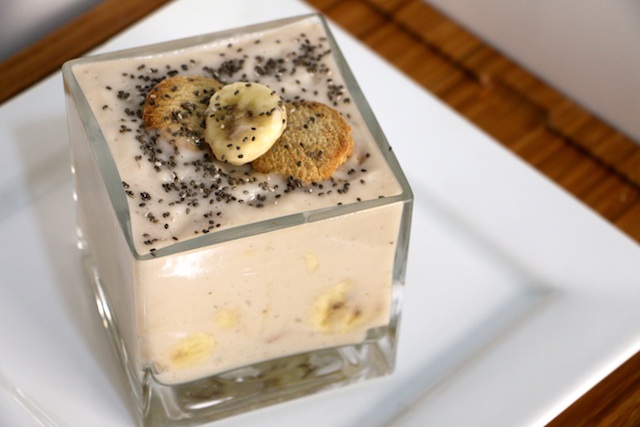 Unlike the old recipe, this new one uses homemade vanilla pudding with stevia and banana for a natural sweetener instead of boxed Sugar-Free Jello, which is full of all kinds of things I can’t pronounce.

I also used Back to Nature’s Vanilla Wafer Cookies instead of Nilla Wafers since the ingredients looked a little more wholesome.

Before I jump into that recipe though, let’s do a little birthday weekend recap.

Friday night we celebrated my good friend and former roommate Sarah’s birthday with some Korean BBQ and karaoke. 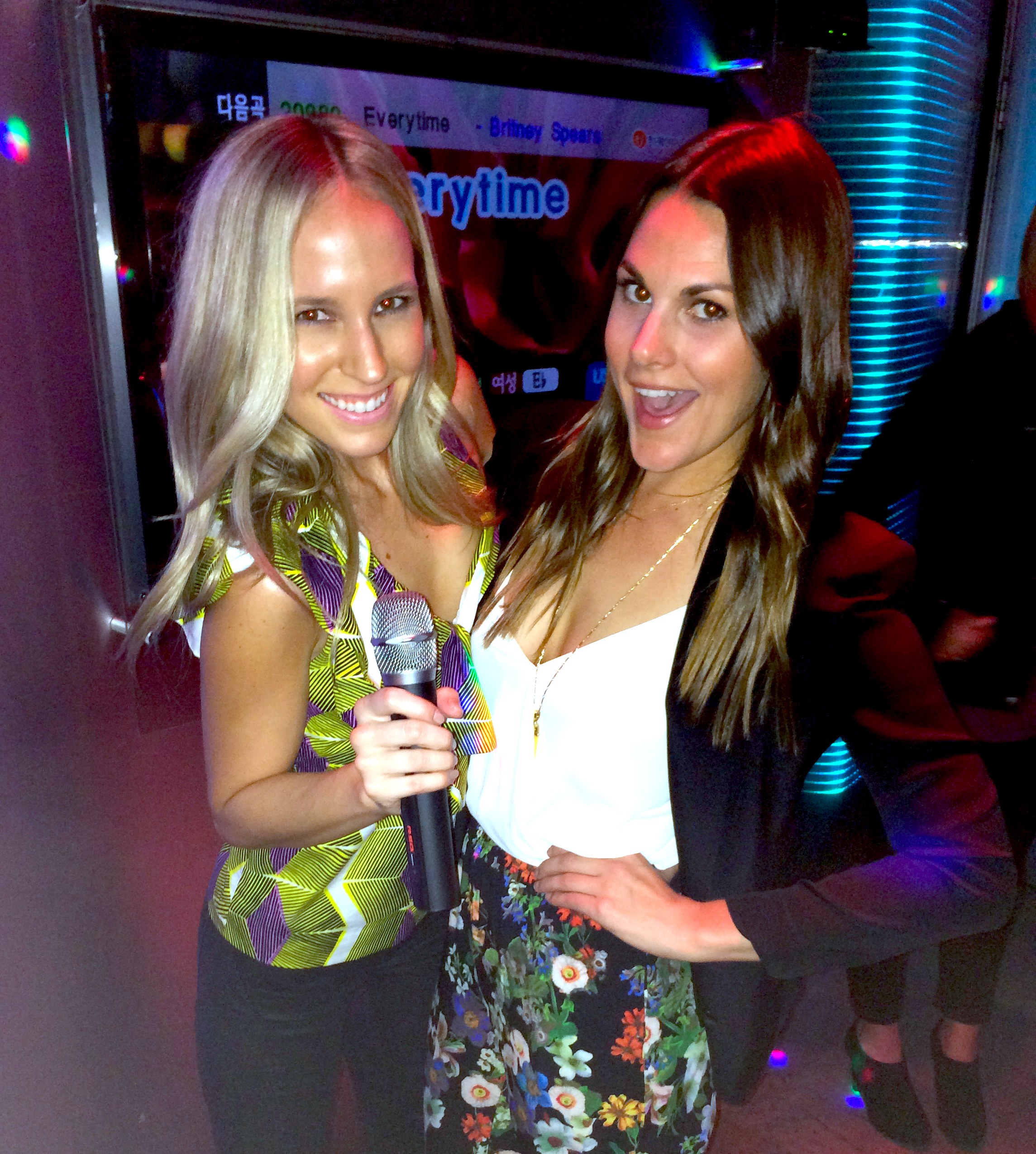 If you’re a fan of the show Giuliana & Bill, you probably recognize Sarah as G’s long-time assistant/wing-woman. Sarah is uber-stylish as evident from her adorable outfits on-screen, so naturally I stepped it up a notch for her b-day. 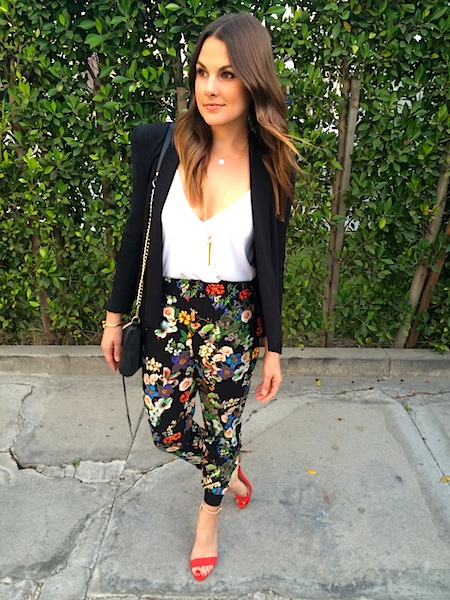 If you’ve never done Korean BBQ before, it’s pretty fun. We went to Chosun Galbee, where you pick your meat and then they cook it at the table in front of you, served with all kinds of interesting sides that you’ve probably never seen before.

I kept it light with some Tiger Shrimp. 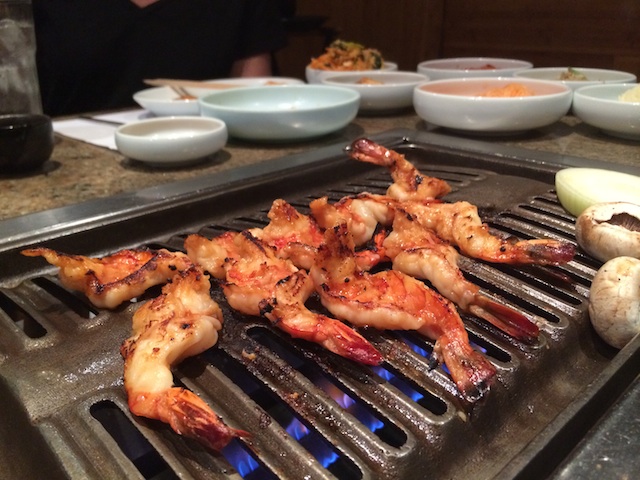 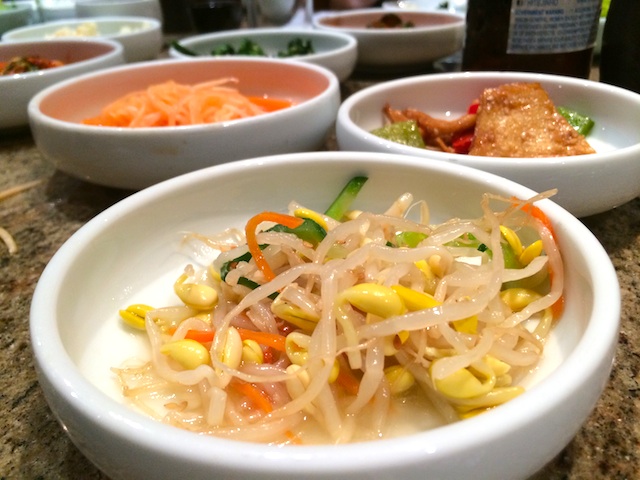 After dinner, we worked off all the meat with an intense karaoke/dance party in Koreatown. 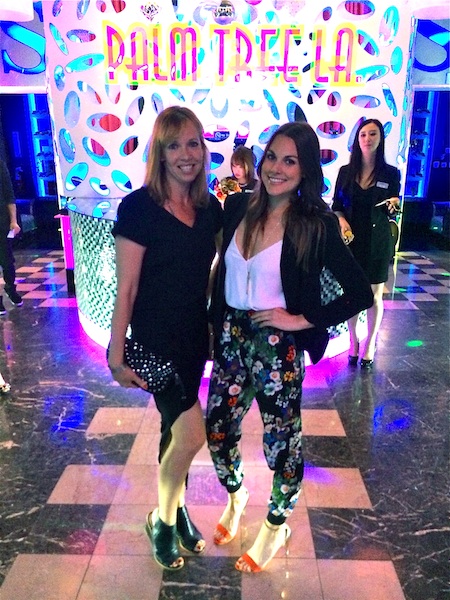 If you never done karaoke in a crowded little room with your closest friends, while shaking tambourines and trying to follow choreographed routines from Asian boy bands, you’re missing out. It’s a blast, and it only costs about $20 an hour for the whole group.

Side note: Lady Gaga’s Alejandro is pretty much the best karaoke song ever.

We finished up the night with a drink at Palihouse in WeHo for my friend Kristine’s 30th before I raced home to make my self-imposed midnight curfew.

Naturally I missed it, and had a lot of explaining to do to Mr. Chow.

Saturday was a little less hectic.

After my weekly 7-hour Organic Chemistry class (snooze), I took Mr. Chow for a hike at Runyon Canyon, then grabbed some radish-wrapped sushi at Echi with my pal Shenae. 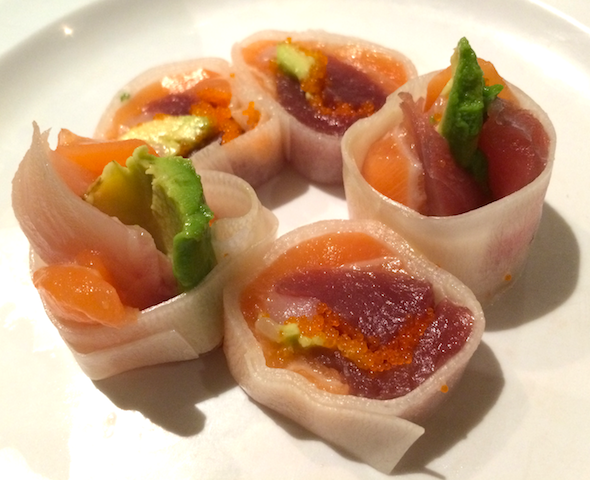 Sunday was back to the birthday grind, this time celebrating for The BF and our pal Laura.

I set up a big brunch at Areal Restaurant in Santa Monica (the same spot as the recent SoCal Blogger’s Brunch) where we enjoyed mimosas and some amazing meals. 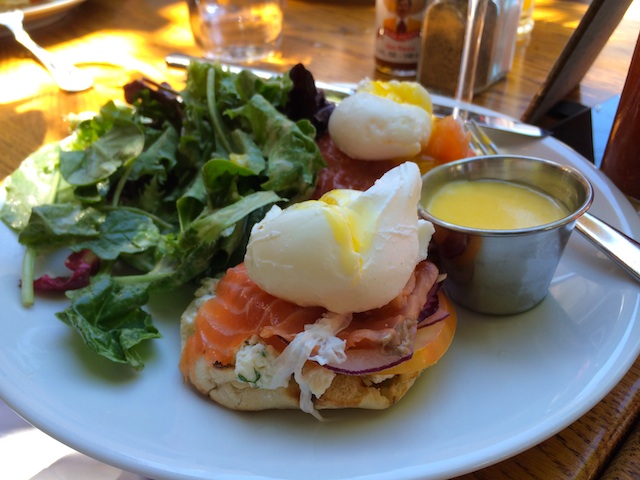 The plan was to head to the beach post brunch for a little volleyball but the weather took a turn for the worse so those plans got nixed.

When we got home, the BF and I shared our favorite Sunday night special — sushi & pizza — then I presented him with my new natural Banana Bread Pudding.

The classic version is one of his favorite desserts so I figured it was the perfect bday treat. 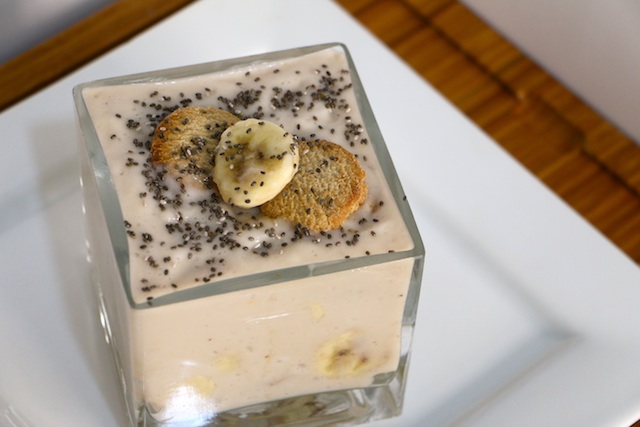 15 Vanilla Wafers (I used Back to Nature)

1. Puree everything up until the wafers together in a blender. It should achieve a pudding consistency. 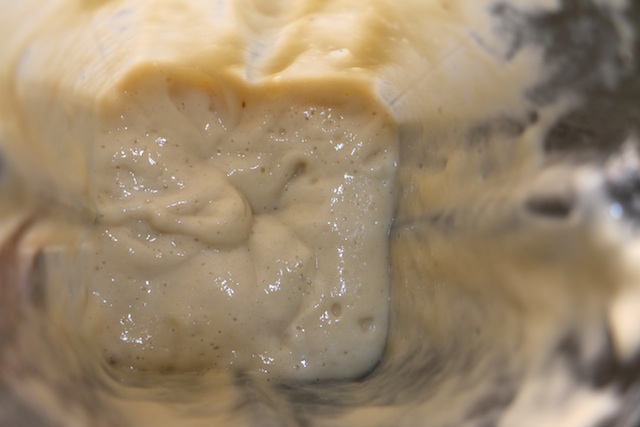 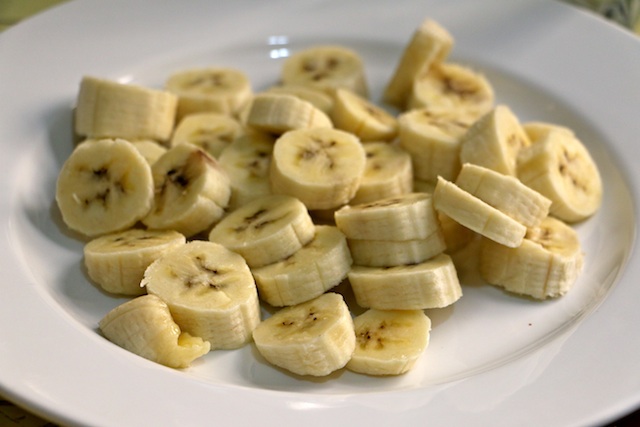 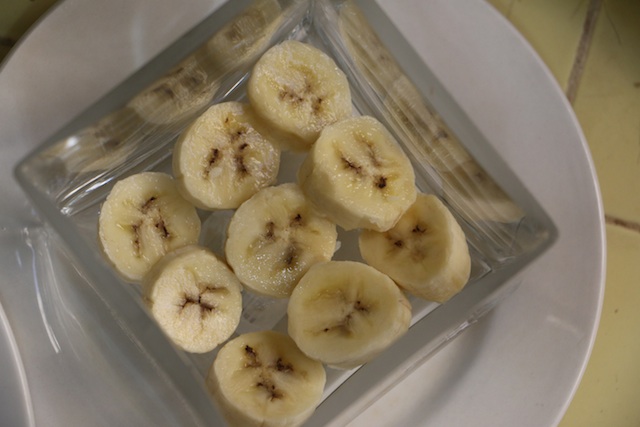 …and wafers until you reach the top. 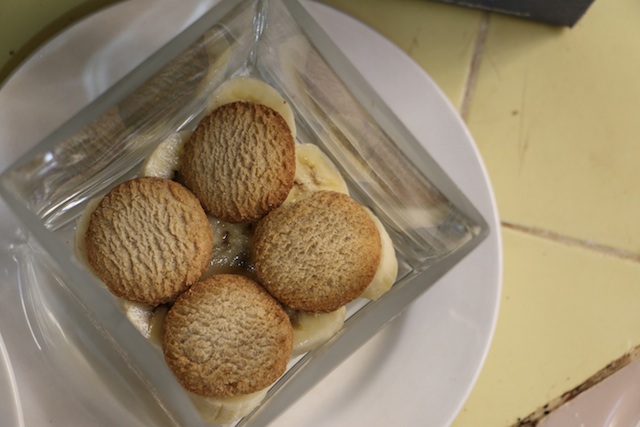 5. Pour pudding into the dish, coating everything. Since the pudding is so thick, it may have a hard time getting into all of the crevices. Tap your dish gently or use a knife to get it to seep into the whole dish. 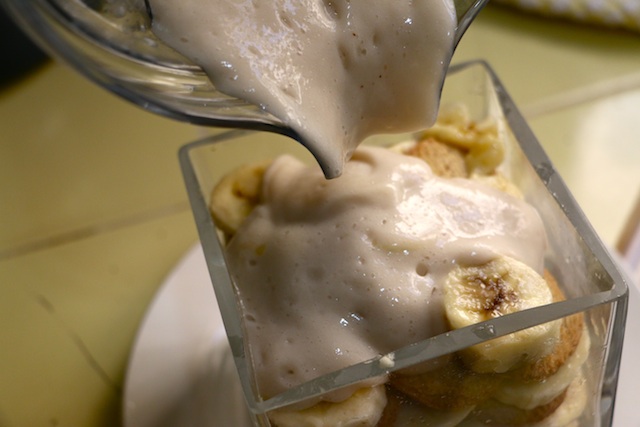 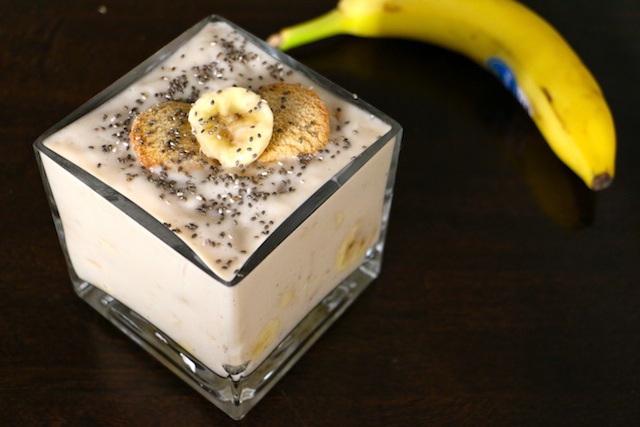 I thought this new version was just as tasty as the old one. I must admit though, the BF said he did prefer the old version, but that this one was good too.

Either way, this dish is a major hit with guests. If your friends care about avoiding super-processed food, I would go with this one. If not, try out my old version. Both are low-calorie, creamy, and totally awesome (if I don’t say so myself).

***One last big birthday shout out to Sarah, Kristine, Laura, and my main man: Love You Guys!***

Weigh In: What was the most exciting thing you did this weekend? Do you tend to splurge on the weekend or is your diet the same all week long?