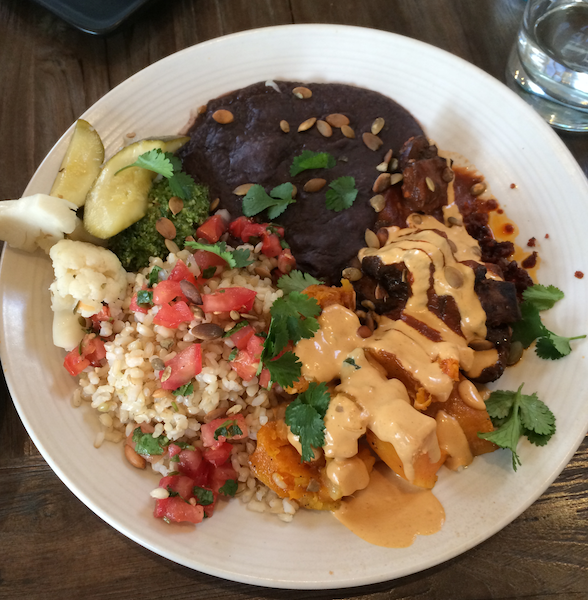 When I tell you guys that Banana Froyo tastes exactly like real ice cream or that a Grain-free English Muffin is just as good as a the regular carb-filled ones, you know that the information is coming from someone who is used to eating healthy foods.

Therefore, if you are someone who eats pretty healthy yourself, you’re likely to appreciate the taste and can trust my judgment. However, if you eat McDonald’s everyday, then my comparisons likely won’t hold true for you.

Let me just say, it’s an understatement when I declare that Gracias Madre is The Best Vegan Restaurant in Los Angeles. Period. 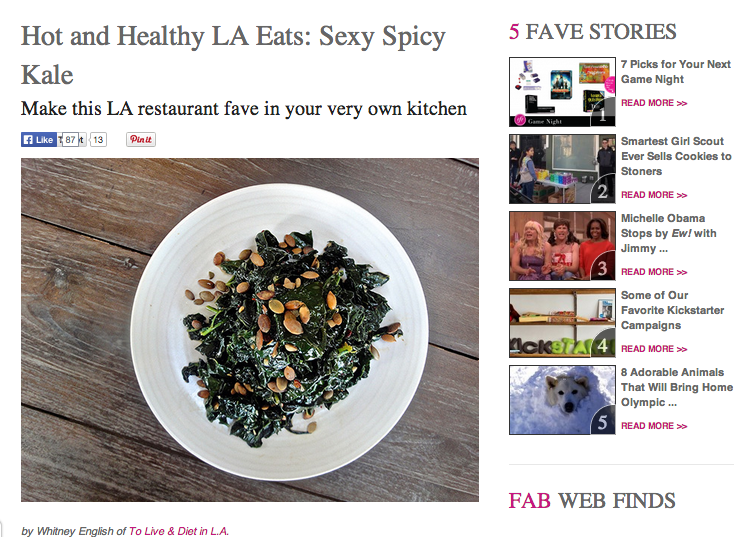 Within two weeks I’d been in three times — a record for me at any restaurant other than Echi Sushi, especially a vegan one.

The first time I went was to find out what all the fuss was about. People had been buzzing for months about this south-of-the-border style sister restaurant to LA’s favorite, Cafe Gratitude (I mean, even Jessica Alba told me she was itching to try it out).

The food at CG is pretty amazing so a couple of girlfriends and I decided to give it a shot. 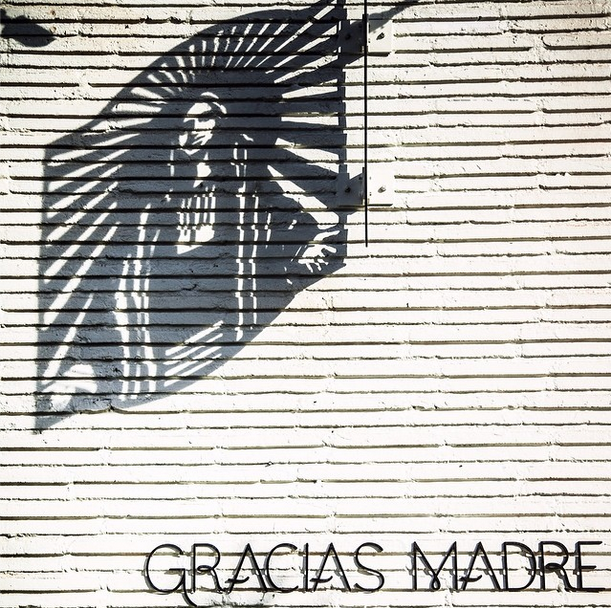 The moment we stepped in the door, we knew this was not your average farm-to-table spot. Unlike Cafe Gratitude, with it’s small interior and laid-back hippy vibe, Gracias Madre is a sprawling restaurant with vaulted ceilings and an upscale rustic decor. 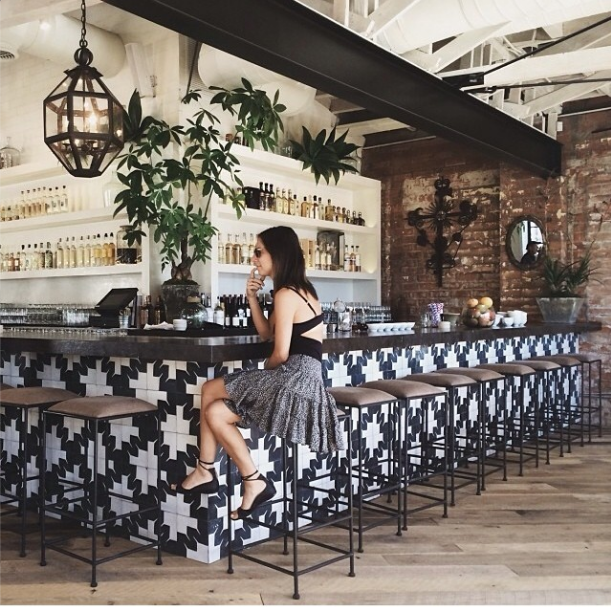 Considering the spot was absolutely packed on a Tuesday night at 6 p.m., we knew were were at a place to see and be seen.

Everything on the menu looked amazing so we had to narrow it down and decided to split three dishes: Repollitos Fritos, Enchiladas con Mole, and the Tacos. Oh, and guacamole, you cannot have Mexican food without guacamole. It’s a sin. 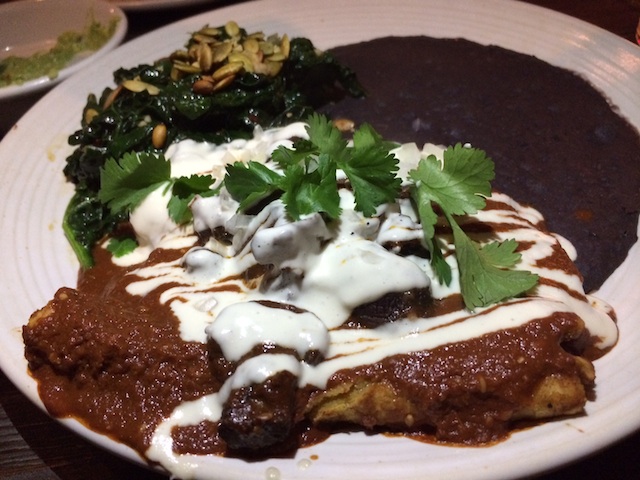 While everything tasted phenomenal, I have to note here: just because something is vegan, does not mean it’s diet-friendly.

Gracias Madre found a way to make brussels sprouts (repollitos) appealing to the most picky of eaters, by frying them. 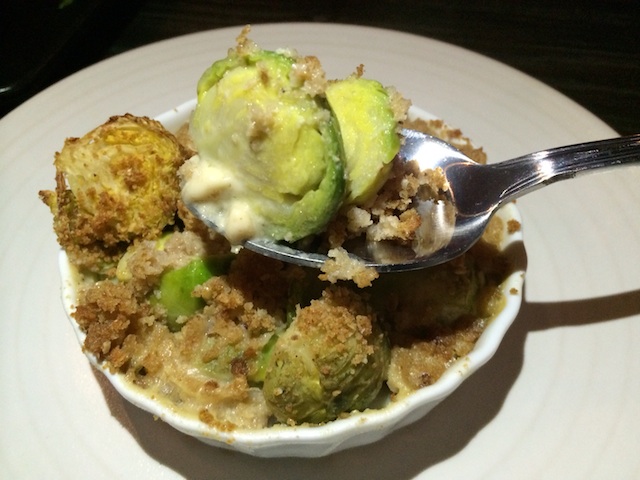 I don’t know what kind of oil they used, so it may be a heart-healthy one, but still. Frying = dietary disaster in my book.

Something you can count on here is that all of the ingredients will be fresh, organic, and locally sourced. They even make their own corn tortillas in the back from stone-ground masa. Which is precisely why the Tacos were my favorite dish of the evening. 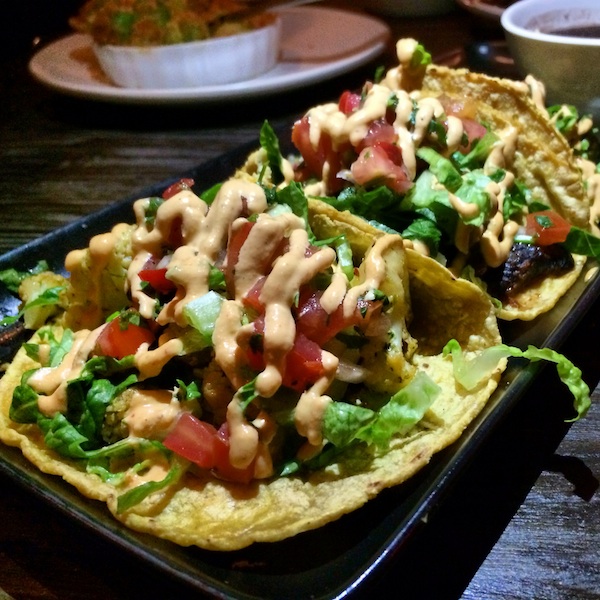 With their fresh corn tortillas, seared cauliflower, and cashew cream sauce, they seem like a pretty good option for those watching their waist line. However, I wouldn’t advise going overboard on the cashew sauce.

The next time I visited Gracias Madre was with my friend CJ, a fellow blogger over at The Vegetarian Dude. He too had heard the rave reviews and was dying to check it out.

Again we decided to spilt: the Flautas de Camote and the El Plato. 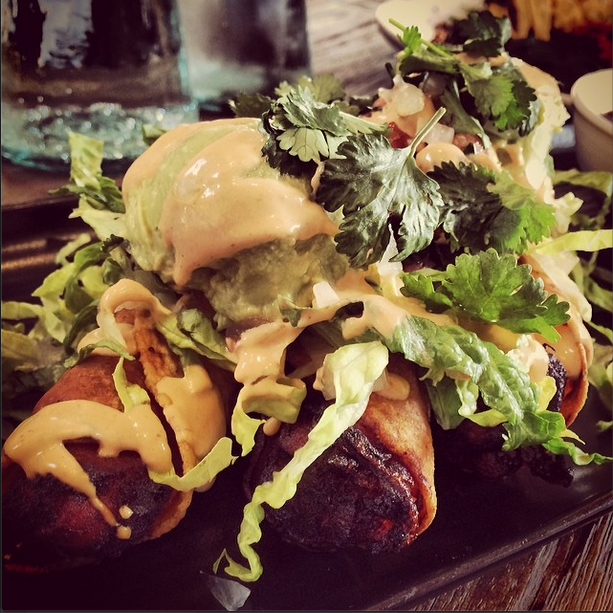 The flautas were out of this world. Filled with melt-in-your-mouth baked sweet potatoes and oozing with cashew nacho cheese, they were seriously the most amazing dish I’ve had in a while.

And then I realized I’d made the same mistake as the brussels sprouts the time before. They were fried. Drats!

Oh well, the plato — packed with roasted veggies, brown rice, and black beans — balanced it out.

The third time I visited was to impress another vegan friend of mine and show her how ‘in the know’ I am about veggie hot spots.

“Oh, I went here last week,” she told me as we sat down. I guess I should have figured that someone who’s actually vegan has been to the hottest restaurant in town.

This time we gobbled down our dishes — the Tamal and the Insalata Del Invierno — too fast to snap any pictures. She had experienced the same fried guilt I had on my previous visits, so we mutually agreed to get healthier dishes.

A massaged kale salad and a tamale stuffed with butternut squash were the perfect choices for a delicious, but diet-conscious, meal.

As we sipped our wine on the busy outdoor patio, engulfed in twinkly lights and surrounded by an excited crowd of vegans and non-vegans alike, I was thrilled to realize that I now have new staple in my repertoire of healthy restaurants.

Unlike some of my favorite places to eat (like Whole Foods and Erewhon — fancy, huh?), this restaurant actually has enough ambiance to bring friends to, who aren’t simply concerned with the nutritional information on the menu. But, it also has the dishes for those who are.

To sum it up, if you’re looking for flavor, I highly recommend the Flautas or the Mole Enchiladas. Looking for something ‘To Live & Diet in L.A. Approved,’ get the Plato, Tacos, or the Insalata Del Invierno.

Don’t live in L.A. and want a healthy dish at home? Check out the fantastic Greens Con Chile y Ajo recipe that Gracias Madre shared with us at Fab Fit Fun. 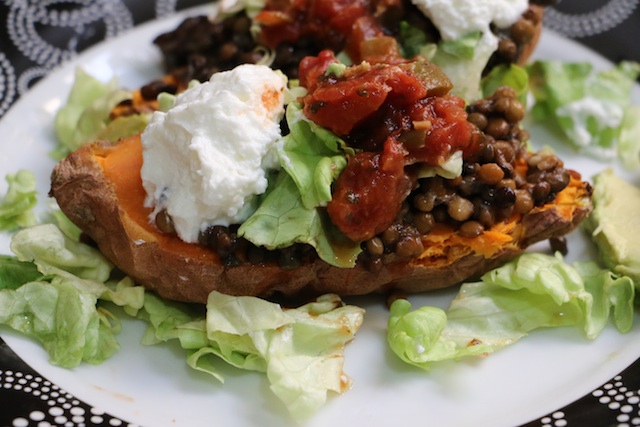 *Note: these meals all clearly fall under the “loosely-based” part of my recent grain-free diet attempts.

Weigh In: What’s your favorite vegan restaurant in your city? Have any fab vegan nacho cheese sauce recipes to share?